Sedra, an Outer Colony that survived the Covenant War.

"The UNSC needs every man and woman patrolling the Outer Colonies. Between the raiders and the insurrectionists, it's a wonder it all hasn't fallen apart."
— Lieutenant Jacob Keyes[1]

The Outer Colonies are the human-colonized worlds farthest from the core worlds, including Earth and the Inner Colonies loyal to it, with colonies founded after. From the late 25th century and well into the Human-Covenant War, disorder and rebellion were commonplace. The majority of the Outer Colonies were glassed by the Covenant during the war.[2]

For a list of notable Outer Colonies, see here.

The Outer Colonies were colonized and founded by the Unified Earth Government mostly over the course of the 25th century, following humanity's first wave of extrasolar colonization between 2362 and 2390.[3] The settlement of Alluvion in 2412 is generally considered the start of the Outer Colonies.[4] Unlike the inhabitants of the Inner Colonies who had been selected from Earth's "best and the brightest", the recruiting standards for the Outer Colonials were far more varied. Due to the colonization contractors' main interests being in valuable resource rights rather than having the best personnel, some Outer Colony settlers were selected from pardoned law-breakers, while others were illegally conscripted. In addition, some colonists used their own means, legal or illegal, to transport to the distant colonies in order to escape Earth's control. All of these factors led the colonists having no particular loyalties to Earth.[5]

The Outer Colonials' resentment of UEG control often manifested as various forms of civil disobedience, such as refusal to pay taxes or living in illegal settlements outside the government's surveillance grids.[6] It was also common for Outer Colony citizens to avoid registering births and deaths to Colonial Administration Authority databases; as such, there was no complete gene registry of Outer Colony inhabitants. However, these registrations were not mandatory, as the UNSC suspected it would have further agitated the Outer Colonials.[7] Most Outer Colony citizens, however, took advantage of the benefits offered to them by the CAA, including the free Outer Colony vaccination program, which was secretly used to catalog children's DNA. This program was later used in drawing suitable recruits for both the SPARTAN-II and SPARTAN-III programs.[7][8] While the Outer Colonials were often reluctant to trust the UEG's United Nations Space Command, the Colonial Military Authority was significantly more accepted after the organization was forced to make the Outer Colonies its province after the UNSC continued to encroach on the CMA's powers in the Inner Colonies.[9]

"Or maybe the UNSC keeps overreacting and causing the Outer Colonies to not want any part of all this. A million casualties now, caught in the crossfire, since TREBUCHET started. No one's going to ignore that. The civilians will keep cheering the rebels on."
— Felicia Sanderson[10]

The Insurrection largely took place in the Outer Colonies. The UNSC Navy's Office of Naval Intelligence and the CMA revived the ORION Project on January 29, 2491 to combat the rebellions in the Outer Colonies.[11] The supersoldiers were deployed to Outer Colony Eridanus II, located in the increasingly rebellious Eridanus system. The Eridanus Government had been overthrown by insurgents and, along with the ORION supersoldiers, the UNSC Navy launched a counter-attack on the usurpers. Although the rebellion was quelled, the insurgents fled to the system's asteroid belt and soon established the United Rebel Front. The SPARTAN-II program was created to combat the insurrectionists. As rebel activity increased in the Outer Colonies, the UNSC initiated Operation: TREBUCHET in 2513. At first, the operation was effective and widely accepted throughout the colonies. However, as the theater of operations expanded and nearly a million civilian causalities had occurred by the mid-2520s, civilian dissent and support towards the rebels grew in the Outer Colonies.[3][10] By 2524, rebel activity was beginning to even hit major Inner Colonies, including Reach and Tribute.[12][13]

The Insurrection resulted in millions of civilian casualties in the Outer Colonies and forced the UNSC to respond with military force. However, according to later analysis, without military action by the UNSC, the Outer Colonies might have risen against the core worlds, leaving humanity even more vulnerable in the onset of the Human-Covenant War.[5] 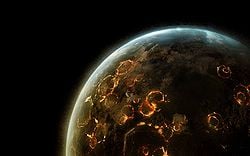 Harvest, the first Outer Colony to be glassed by the Covenant.

"Many of you may have come from Outer Colonies. Colonies that fell to the alien Covenant while the UNSC took their time to enact methods of dealing with the aliens. Colonies that you know were not as well protected as they could have been, because the UNSC's loyalties are to Earth first, the Inner Colonies next, and the Outer Colonies last."
— Maria Esquival of the Rubble[14]

Beginning in 2525, Harvest was the first Outer Colony and human world to fall to the Covenant's genocidal wrath.[15] The technologically superior alien empire succeeded in pushing its way through the Outer Colonies, glassing the human worlds in its path. Vice Admiral Preston Cole mounted a defense in the Outer Colonies against the Covenant; despite his tactical prowess in space warfare, the Covenant still proved to be unstoppable. By 2535, with the destruction of Jericho VII, most Outer Colonies had been lost.[16] In the same year, Cole had established the Cole Protocol that forbade human vessels from retreating directly to a human-occupied system after an encounter with the Covenant, to prevent leading the Covenant to other colonies.[17] Some Outer Colonists were displeased with how long it had taken for such a protocol to be established, as many Outer Colonies had been destroyed by the time of its creation.[14][18] Meanwhile, the war had finally moved closer towards the Inner Colonies. The Inner Colonies that were located around the border between the Outer and Inner Colonies soon became staging points for the UNSC.[19]

After the end of the Human-Covenant War in early 2553, tensions in the remaining Outer Colonies were on the rise again. Some of the colonies had cut off communications with the UNSC during the war, using the chaos to their advantage. Fleet Admiral Terrence Hood set off on a diplomatic mission across the colonies to discuss reconstruction, but some refused his offer, feeling that the UNSC abandoned them during the war.[21] Some Outer Colonies seeking to extend their autonomy from the UEG favored small, long-range, slipspace-capable utility craft such as the D81-LRT Condor to scout potential trade routes and manage diplomatic relations with other worlds, allowing them to avoid the UNSC's control over interstellar commerce.[22] The UEG and UNSC initiated a recolonization campaign after the Covenant War, with efforts to reclaim every world that humanity had lost during the war. One of the first to be resettled, Draco III was fully populated once more by 2554 and served as a staging ground in furthering the effort to reestablish control and contact with the other outlying worlds. By 2558, several glassed Outer Colonies had been recolonized to some degree by the UEG, including Eridanus II[23] and Biko.[24] The former Outer Colony Carrow fell into a Joint Occupation Zone and was shared by both humans and Sangheili refugees from the destroyed Sangheili colony of Glyke.[25]

In 2558, directly after ONI's method of candidate conscription for the SPARTAN-II program was revealed to the UEG Senate, the Outer Colonies saw a total loss of interplanetary—and possibly local—communications, by way of ONI disabling Waypoint buoys to prevent dissemination of information regarding their activities, along with the outbreak of serious civil unrest against the UEG in retaliation against the atrocities.[26] Communication was restored along with peace in the colonies upon the discrediting of Benjamin Giraud on a live broadcast.[27]

A majority of Outer Colonies are managed under the Unified Earth Government's administrative control, with colonial governance regulated by the UEG's Colonial Administration Authority. The UEG is a representative democracy[28] and, thus, the government is formally a union of independently governed worlds.[3] Officially, Throughout the 25th century, the UNSC's presence on the Outer Colonies was steadily increasing. This led to some colonies questioning the legitimacy of their sovereignty.[3] By 2494, the UEG began to experience difficulties with its logistic ability to control the Outer Colonies.[5] Some Outer Colonies were established by megacorporations that also served as the government for these worlds, such as the Talitsa Corporate Council that governed Talitsa. Corporation-controlled governments often proved to be ineffective and these Outer Colonies often experienced political uprisings, insurgencies, and dissent among its citizens.[29][30][31]

The outer colony of Madrigal.

Most Outer Colonies lacked the pervasive UNSC military presence that was often seen on Inner Colonies. Prior to 2525, the Colonial Military Authority served as the Outer Colonies' primary defense organization—having been relegated to the frontier worlds after the UNSC continued to encroach on its authority in the core worlds. Eventually, the organization became increasingly loyal to the Outer Colonies over Earth and a majority of the CMA's personnel were Outer Colonists, who saw themselves as bold frontiersmen. Ultimately, the CMA lost a majority of its power in 2497 and was then absorbed by the UNSC in 2525 after the organization continuously suffered widespread corruption[9] and many of its high-level officers were proven to have insurgent loyalties.[11] As several Outer Colonies have little to no UNSC presence,[9][32] they must rely on their own militias or paramilitaries—occasionally organized by the UNSC's Colonial Militia—for planetary defense operations.[33]