The Colonial Military Administration was originally responsible for patrolling and protecting the Outer Colonies, while the United Nations Space Command defended Earth and the Inner Colonies.[6] Due to widespread corruption and many officers sympathetic to the Insurrectionists within its ranks, the CMA's role and powers were largely taken over by the UNSC.[5] The CMA became responsible for minor operations in the colonies after its takeover by the UNSC, such as guarding military installations and riot patrol.[7]

The Colonial Military Administration was formed alongside the Colonial Administration Authority in 2310,[4] by the Unified Earth Government. Originally, the CMA was charged with taking control of all United Nations Space Command vessels and ground forces that were reassigned to defend humanity's colonies. Colonial protection was seen as a ceremonial function that was largely intended to appease the colonists' fears of pirates and marauders in human space. The UNSC determined that a separate command to administer these activities and operations of little significance would suffice. As such, the UEG assigned the CMA to uphold these tasks.[5] On April 13, 2321, the original supersoldier program was established with the Colonial Military Administration.[6] However, poor results led to the Office of Naval Intelligence putting the project on hold.[8]

At the time of the CMA's formation, the UNSC's Naval Command and Unified Ground Command were convinced that their own resources were better spent on operations within the Sol system, and left the interstellar colonies to be protected by the CMA. However, as humanity's colonies began to expand and started to take on vital roles, NAVCOM and UNICOM attempted to disband the CMA and usurp its role on several occasions. Despite this, the colonial command was uncompromising and insistent on protecting their territory. The CMA's founding charter—approved by the UNSC—gave the organization little room for external maneuvering. In spite of the many efforts taken by both sides to take sole military command of the colonies, by 2400, NAVCOM and UNICOM were both operating within the Inner Colonies alongside the CMA.[5]

Expansion to the Outer Colonies[edit]

As NAVCOM and UNICOM continued to encroach on the Colonial Military Administration's control, the CMA began to move to the recently established Outer Colonies. Making the Outer Colonies their province, the CMA began assigning a majority of its military forces on frontier worlds. Most of the CMA's personnel were recruited from the Outer Colonies, and the organization's soldiers believed themselves to be humanity's "frontiersmen" and considered themselves to be exceptionally bold and adventurous compared to their UNSC counterparts. The Unified Earth Government's colonies continued to expand and, with the CMA at the forefront of this expansion, the colonists were aided with "taming" their worlds. In sparsely populated areas, the CMA protected citizens from lawlessness.[5] However, tensions began to rise throughout the Outer Colonies as the CMA increased trade restrictions and taxes.[9]

In the late 2400s, as the Insurrection began across the various colonies, tensions developed within the UEG's hierarchy. The CMA's control over the Outer Colonies and already strained relationship with the rest of the UEG led to several of the organization's soldiers sympathizing with the Insurrectionists and the plight of the colonists. However, the soldiers of UNICOM and NAVCOM continued to hold more allegiance to Earth and the Inner Colonies.[5] On January 29, 2491, ONI and the Colonial Military Administration secretly relaunched the ORION Project in order to quell increasingly violent insurrections. Although the initial results were costly, ONI deemed the project "adequate".[8][10]

In June of 2494, secessionists within the Eridanus system began a campaign of violence against the Unified Earth Government, using equipment supplied by traitors within the Colonial Military Administration. The CMA-equipped rebels performed a violent, well-planned, and efficiently executed campaign against Eridanus II that heavily impacted the planet's shipping industry, and ultimately taking control of the world.[11] The Eridanus Government petitioned the UNSC for aid, and HIGHCOM dispatched a battle group in January of 2496 that crushed the rebellion, though not so conclusively as to avoid continued dissent.[5][12] By this time, the aging HMG-38 heavy machine guns in CMA service began to be replaced throughout the frontier, with the VK78 Commando rifle introduced into CMA service in 2495.[13]

In 2496 during Operation: VERITAS, Project ORION operators obtained the non-official cover list of undercover Secessionist Union operatives working in high-level office positions within the CMA. This prompted the UNSC to take action against the CMA, moving for the organization's shut down.[8] In 2497, the Colonial Military Administration's involvement with the rebels went public.[12] This was considered the beginning of the end for the colonial military. Citing security concerns, the UNSC gradually shifted the resources of the CMA to NAVCOM or UNICOM control over the following decades. The CMA was relegated to patrolling the UEG's most distant colonies and with providing logistical support to remote stations.[5] The funding of the ORION Project was reallocated from the CMA, leading to the program's shut down.[8] Although ONI's Beta-5 Division attempted to resurrect the program from the remnants of the CMA's ORION Project, the mission was abandoned when the program proved to be too expensive to continue.[5] The remaining ORION soldiers were reassigned to various UNSC Special Forces units.[14]

After contact was lost with agriculture world Harvest, the CMA sent the scout ship Argo to investigate. When the scout ship failed to report for six months, the CMA-controlled Battle Group 4—under the command of Captain Maribeau Veredi—then followed the Argo. The battle group discovered that the planet was glassed by the Covenant and they were attacked by a Covenant ship upon exiting slipspace in the system. Only Veredi's heavily damaged vessel survived by limping back to Reach.[15]

By 2525, the CMA had been sidelined to the point of redundancy. Its budgets had been slashed and as such it was reduced to using obsolete and worn-out vehicles, equipment, and uniforms. Unlike the UNSC, CMA boot camp lasted just two weeks, which in the words of CMA veteran Gage Yevgenny was "enough to teach you how to use your weapon, salute, march, and drive a Warthog before they booted you right on out there."[3] The CMA became responsible for minor operations in the colonies after its takeover by the UNSC, such as guarding military installations and riot patrol.[7]

On November 1, 2525, all CMA combat forces were placed under NAVCOM or UNICOM control "for the duration of the crisis" and the organization was fully absorbed by the UNSC.[14] This reorganization essentially became permanent as the Human-Covenant War dragged on, and by 2552, the Colonial Military Administration was essentially a small fleet of navigational buoy tenders and remote fuel depots manned by wounded veterans and personnel considered unfit for combat service.[5]

After the Human-Covenant War, many outdated rifles and armor formerly in service with the CMA was found in the hands of the Venezian militia.[16] 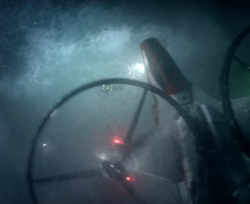 A CMA tilt-rotor craft in the middle of search and rescue operations.[17][18]

The CMA was broken up into subordinate branches. This includes the CMA Navy which is tasked with space operations and the CMA Marine Corps which was tasked with ground operations.[1]

The CMA was the first military organization to incorporate AMG Transport Dynamics' M12 Warthog in 2321 to meet most of its land-based transportation needs.[19]

The CMA issued its operatives with UA/CMA SN5 Type 11 armor for combat missions against pirates, marauders and insurgents. Developed in the 24th century, this shoulder armor would eventually find its way into the hands of the Venezian Militia by the mid-26th century.[20]

The CMA lost most of its vessels during the organization's fall from power.[21] However, the CMA continued to maintain a fleet of its own by 2525, composed of UNSC Charon-class light frigates, Hillsborough-class destroyers, and scout ships.[15] Due to a lack of vessels, the CMA had to purchase its personnel tickets on civilian flights to transport them between worlds.[21] The CMA once owned many colonial ships that aided in the establishment of new colonies and settlements, such as CMA Season of Plenty.[22] Other ship classes used by the CMA included the Lancer-class fast-attack corvette and the Scholte-class missile corvette.[23]