The Secessionist Union was an alliance of human insurrectionists that desired freedom from the Unified Earth Government.[4] The Secessionist Union played a large part early in the Insurrection, having infiltrated the UEG's Colonial Military Authority and having taken over Eridanus II from its government, leading to the United Nations Space Command launching Operation: CHARLEMAGNE.[2]

Having been recently established in 2487, the Secessionist Union and the People's Occupation submitted formal requests on the behalf of a dozen worlds, demanding sovereignty from the Unified Earth Government. The UEG denied both groups' requests, leading to rising tensions and increased violence among the Outer Colonies.[2] 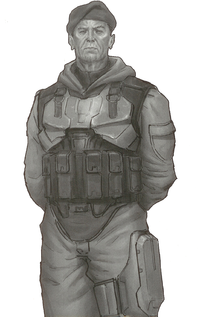 Former Marine Robert Watts served in a leadership role in the Secessionist Union prior to the founding of the United Rebel Front.[2]

By 2496, a number of Secessionist Union agents were working undercover in various high-level positions within the Colonial Military Administration. However, ORION Project operators managed to secure the non-official cover list of these operatives during Operation: VERITAS. In response, the UNSC immediately moved to shut down the CMA, marking the beginning the downfall of the organization.[5] The Secessionist Union's leader, Jerald Ander, was assassinated on Harvest in 2502 by Corporal Avery Johnson during Operation: KALEIDOSCOPE, a UNSC operation designed to eliminate rebel leaders.[4] Without their leader, the Secessionist Union fell into chaos and much of the faction would ultimately dissolve, though Ander became a martyr to various rebel cells throughout the colonies.[3] By 2509, numerous rebel cells combined under the leadership of Watts, forming the United Rebel Front.[2] As of March 2526, some vestiges of the Secessionist Union still remained as Nanci Ander represented them while attending a conference hosted by Captain Lyrenne Castilla aboard the Bellicose. At the meeting, envoys from various prominent Insurrectionist faction discussed their next moves with the appearance of both the Covenant and the SPARTAN-II program.[6]

According to the Halo Encyclopedia (2009 edition), the Secessionist Union and the People's Occupation Government are synonymous.[7] Both organizations are originally mentioned on page 122 of the Halo Graphic Novel, in the profile of Jerald Mulkey Ander; Ander is noted as being the "Section Head" of the Secessionist Union, with ties to the People's Occupation Government and Harvest for Harvesters. Before the release of the Encyclopedia, Halopedia had mistakenly regarded the two organizations as synonymous; while this mistake was later corrected, the error was repeated in the Encyclopedia as much of the book's content is obviously based upon that of Halopedia. As the Encyclopedia's claim is based on a fan mistake, Halopedia regards the two groups as separate as is implied in the original source.