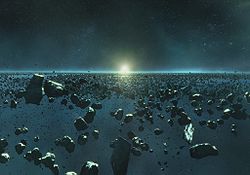 An asteroid is a naturally occurring solid object that is smaller than a planet. They are often found in asteroid belts orbiting a star or in planetary ring systems. Asteroids may also occur scattered in orbital Lagrange points.[1]

Some asteroids have been converted by humanity to serve as colony habitats or military bases. While many asteroids are too small to maintain sufficient gravitational pull or atmosphere on their outer surfaces despite advanced terraforming technology, this shortcoming can be surmounted by constructing the habitat into the hollowed-out interior of the asteroid, with simulated gravity provided by the centrifugal force of the asteroid's spin. Notable examples of such asteroids were the Insurrectionist hideouts Eridanus Secundus and the Rubble, the latter being a remarkable feat of engineering, composed of hundreds of asteroids with independent propulsion systems connected by flexible docking tubes.[2]

The Covenant used asteroids such as K7-49 as refineries and shipyards.[3] The Kig-Yar home system, the Y'Deio system, is home to an exceedingly large asteroid field which is home to many Kig-Yar colonies.[4]

Asteroids have also seen weaponized uses in space engagements. In a skirmish following the Callisto Incident in 2494, an asteroid was used by the Insurrectionists to gain a tactical advantage in battle, using a outward-facing nuclear explosive device buried in an asteroid, greatly increasing the destructive power of the weapon in vacuum environment by providing enough reactive mass to destroy one UNSC ship and cripple two.[5] Forerunner warships, such as Harrier-class vessels, were equipped with "gravity slings", gravitic weapons which allowed them to propel asteroids or other small objects at great velocities and use them as projectiles. A notable advantage of this over the more common directed energy weapons was the vessel's ability to remain untraceable. This tactic was used by the Forerunners to their great advantage in the battle at Path Terrulian during the Forerunner-Flood war.[6]

The depictions of asteroid belts in Halo: Reach and Halo: Fall of Reach - Boot Camp follow a common popular culture depiction of an asteroid belt, where the asteroids float in an extremely dense field within visible distance of each other. In real life, asteroids are spaced millions of kilometers apart and it would be highly unlikely to even see one when passing through an asteroid field.