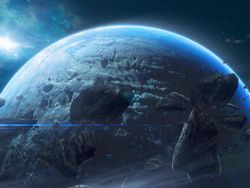 Sothra Hakkor was a core world of the ancient human empire, located in the same system as humanity's capital, Charum Hakkor.[note 1] The human empire mined the planet for ores and volatiles.[1] After the human-Forerunner wars, the Didact ordered several monuments built to his fallen Warrior-Servants, one of which was built in the ring system around Sothra Hakkor.[2]

The Warrior-Servant monument orbiting Sothra Hakkor is the setting of the Halo 4 multiplayer map Monolith. Technically the rock formation surrounding the planet is a ring system, though it is officially referred to as an asteroid belt.