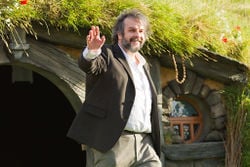 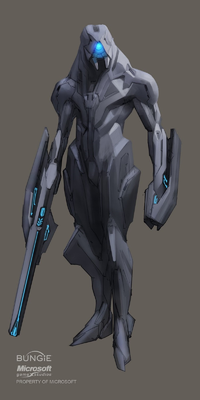 Concept art for the "Promethean", by Isaac Hannaford.

"Joe came up with the concept of “be the bullet”. We wanted to take the player on this emotional and gameplay journey from just being human to being a modified human. Not modified in the sense that you just put on power armor, but where there’s biological shit actually happening to you."
— Paul Bertone[2]

While Chronicles was in development, a select team of Bungie employees - namely Joseph Staten and design director Mike Woo - was working in New Zealand with Jackson. Gameplay designer Paul Bertone was involved as well for some time around the time of Halo 3's release.[2] When Chronicles was later cancelled, the team returned to Bungie to work on Halo 3: ODST instead.[4] Staten in particular had a key role in coming up with Chronicles's story, as well as advising the WingNut writing team.[2]

It was stated that Chronicles would "focus on the intimate, personal aspect of war."[5] The player would have been an ordinary Marine rather than a Spartan and thus also weaker than in the prior games. Over the course of the game, however, the player character would acquire an "alien arm" and eventually be transformed into a powerful Forerunner warrior known as a Promethean.[2] The player character was later stated by Paul Russel to be a human miner who had been captured by the Covenant and subjected to their slavery, before finding the technology that would set him on his journey.[6]

The player would be able to switch into a different combat mode in which the only way to deal damage was through a powerful melee attack. Two weapons were available: one that would push enemies away, while the other would stun them in place. Other features included a double jump and an auto-aimed long-distance dash that could be initiated from mid-air. Many basic gameplay features were prototyped, notably a lowered camera and jump height, a slowed-down movement, and no recharging shields. These features were tested in modified versions of the first five missions of Halo 3. The team found that they could downgrade surprisingly many of the player's base traits, although fewer alterations were made to weapons. Since the player would have been weaker, modifications were made to enemy behavior to retain gameplay balance. Paul Bertone and engineer Damian Isla worked on an enemy AI system called "kung-fu", in which only a couple of enemies would attack the player at a time even if more enemies were present; the others would either be hiding or in cover, only revealing themselves sporadically. Eventually, when the player was fully Promethean, they would be flying in low orbit and fighting Covenant cruisers with the ability to turn into a missile and target specific parts of the ships. Gameplay prototyping for Chronicles was relatively far along, although because the story remained unfinished, the gameplay team could not start actually designing the campaign missions.[2]

Ultimately, enthusiasm for the Chronicles project dropped as the Peter Jackson Halo film deal was cancelled; additionally, Bungie was beginning to have creative differences with the WingNut team.[2] After its cancellation, many of the gameplay features prototyped for Chronicles made it into Halo 3: ODST. Meanwhile, the concept of the Prometheans was later reintroduced into the Halo canon via The Forerunner Saga and Halo 4. Some story concepts developed for Chronicles resurfaced in the Neill Blomkamp film District 9, in which the human main character slowly transforms into an alien in a rather similar fashion as in the planned story of Chronicles. Additionally, the film allegedly re-used many of the props originally created for the Halo film project. According to Bertone, Staten "had trouble" seeing the film because of its overt parallels to his story ideas.[2]

Several corporate starships were concepted by Isaac Hannaford for Halo: Chronicles.[7][8] He described them as used by a corporation, and said the ships were a mix of military and civilian themes. They are equipped with limited weapons and transport mercenaries and scientists.[9]