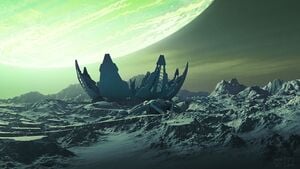 A matte paintover of a shot from the trailer, dated c.2011 (bottom-right). This shot was taken around four seconds into the trailer.[1]

This untitled Halo project was developed around the late-2000s and early 2010s, being cancelled some time in or after 2011. Little is known of the project's goals, with almost all information currently known provided by portfolio uploads by artist Sasha Beliaev posted in 2016.[2]

The project was in production around the late 2000s or early 2010s, and uses a number of assets and designs from that era of Halo media including the MJOLNIR Mark IV design featured in 2009's Halo Legends, and the MA37 assault rifle introduced in 2010's Halo: Reach. Beliaev's work on the project consisted of the creation of a small cinematic previsualisation environment for a trailer used to test internal development tools. Beliaev's guidelines on the project included;[3]

Altogether, the project was done over a course of roughly two months, with the environment taking around three weeks to construct and an accompanying spacecraft model taking another four weeks, including texturing.[5] The ship was described by Beliaev as a "frigate", and its overall design does bear a heavy resemblance to the frigates used by the UNSC Navy in Halo canon - albeit with a heavy artistic exaggeration. The frigate itself was built in an extremely low-poly fashion as to run in real-time and textured using one tileable texture, with a height map stored in the texture's alpha channel for the illusion of depth.[4] The frigate featured a retractable loading ramp and numerous ball turrets.[3][6]

The environment itself consisted of a large underground presumably-Forerunner structure rising out of the ground in a manner not-dissimilar to the Ark portal concepts developed for Halo Combat Evolved and visualised in Halo 3, or the Ark structure itself intended for the Earth Ark level cut from Halo 2. The terrain was done via simple geometry displacement, and featured a gas giant in the sky background.[8] A large wide-shot of the structure was present at around four seconds into the trailer (seen at the top of this article)[1], described by Beliaev as a "death ray generator" and intended to explode in a "most spectacular fashion". Further concept paintovers of the structure date one frame as taking place at frame 642[Note 1] and depicting a first-person view of the player holding an MA37 assault rifle, with another paintover showcasing an aerial view from the frigate and the death ray exploding. The death ray's appearance and function are notably similar to the idea of the Forerunner particle cannons featured in Halo 4.

The environment set fairly simple in design, featuring an exterior "helipad", a short hallway interior and a large dome in the centre where the "death ray" was located. Several lighting tests were done on the environment.

The project was in production by at least some time in 2011, by which time the wide-shot matte painting was produced. Some time after this, the project was cancelled for unknown reasons. Beliaev speculated that this may have been in part due to differences in workflow - Beliaev modelled and textured the frigate model with heavy emphasis on reused tileable textures. However, the model was later handed off to an unnammed studio that specialised in using Mari to texture, and were less familiar with the tileable workflow used by Beliaev. The issues caused by this error were purported to "screw up the schedule real bad" and interfere with the project - something Beliaev attributed to causing its cancellation.[5]

Some of the details about this project indicate it may have been a part of the development of Halo 4. For one, the process was done around the 2009-2011 era in which Halo 4 was undergoing production, and features certain elements familiar to Halo 4 such as the ideas of Master Chief and a frigate (IE the UNSC Forward Unto Dawn) trapped on or around a Forerunner environment. If so, this may have been a part of the earlier Halo 4 (and even some more general pre-Halo 4 ideas) direction pushed by then-creative director Ryan Payton during his tenure at 343 Industries. During this time, Payton championed many different ideas (most of which never made it into prototyping) which were later described by Frank O'Connor as beign extremely different to the final Halo 4;[9]

Payton ultimately left the Halo 4 project in summer 2011 (the same year as this cancelled Halo project) as the game shifted away from his vision, though noted some of his ideas were later reused in Halo 5: Guardians, and that one large idea he proposed "definitely made people uncomfortable, which was a natural reaction, I think.".[9] This process, described by Marcus Lehto as a reboot in the game's development (though denied by O'Connor) may have additionally influenced the cancellation of this project[9] - though it is also entirely possible the two were unrelated, as studios typically have several projects in their development pipelines at a time. Around the same era projects like Haggar were also in development (and ultimately cancelled).