"In recognition of this, his steadfast resolution, we honor him as commander of Noble."
— Monument to Noble Team

Commander Carter-A259 was a SPARTAN-III commando of the UNSC Naval Special Warfare Command, attached to the UNSC Army's Special Warfare Group Three.[3][4] Carter was the leader of NOBLE Team, an elite team of Spartans who fought during the Fall of Reach.[1][5] His call sign in the team was Noble One.[6]

A 16-year-old Carter immediately prior to undergoing augmentation on the UNSC Hopeful.

Carter was born in Durban, Biko on August 27, 2520. His parents were killed when Biko was attacked and glassed by the Covenant in 2526, though he survived the planet's fall. Before he could join the rest of the planet's refugee program,[1] Carter was conscripted into the Spartan-III program's Alpha Company in 2532. From early on, he stood out from the rest of the group, and LCDR Kurt Ambrose and SCPO Franklin Mendez, taking note of his exceptional skill, deemed him too valuable to be wasted on suicide missions.[7] Upon his graduation in 2536, Carter was assigned to lead a special fireteam composed of Spartans similarly extracted from Alpha Company's mainline population. Carter's team was subsequently transferred under UNICOM's operational authority as part of an arrangement to secure Army support for the SPARTAN-III program within HIGHCOM.[1]

Carter's leadership skills in and out of combat throughout his military career eventually earned him the rank of Commander in the UNSC Navy, becoming one of the few highly ranked Spartans to serve in the field. Later, after the special forces unit Noble Team was formed, Carter became the leader of the team, which then consisted of Catherine-B320 and several other Spartans. Eventually however only Kat and Carter would survive as the remaining members of the original team by 2552, and Carter was given a lot of freedom in selecting replacement personnel by his superiors due to his ability to build tight-knit teams.[1] 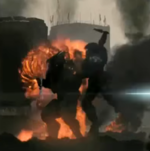 Carter assassinates a Sangheili Ultra during the Battle of Fumirole.

During the Battle of Fumirole on April 22, 2552, Carter led Noble Team in an operation put together by Kat[8] to destroy a Ket-pattern battlecruiser maintaining position above a city. The operation was successful, but at the cost of Thom-A293.

Both Carter and Kat took responsibility over the death of Thom, unable to admit that the death of the SPARTAN was his own decision. Thom was replaced on Noble Team by SPARTAN-B312 a few months later, just prior to the Fall of Reach.

Throughout the course of the Fall of Reach, Carter led Noble Team in multiple operations against Covenant forces, such as the investigation of a communications blackout at the Visegrad Relay, a mission which led to the first confrontation with Covenant forces on the planet, the counter-offensive operation on Sword Base, and a large-scale UNSC assault on a Covenant-occupied site and the neutralization of a Covenant tower.[9][10][11]

The destruction of the UNSC Grafton by the Covenant supercarrier Long Night of Solace after the Battle of Viery prompted Carter and Kat to review the situation. Recognizing the presence of the supercarrier as a large threat, Noble Team decided to utilize a "non-existent" space vessel and launch a makeshift slipspace bomb at the Covenant vessel.[12] Carter, along with Kat-B320, Jorge-052 and Noble Six, helped UNSC ground forces repel Covenant invaders from a UNSC base, which housed the Sabre launch facility. Noble Team was separated at this point, with Jorge and Six participating in Operation: UPPER CUT with the rest focusing on the groundside.[12]

On August 23, Carter and the remaining members of Noble Team assisted the UNSC in protecting the planet's civilian population from the Covenant. They reunited with Noble Six in New Alexandria and helped in the neutralization of Covenant jammers and evacuation of ONI personnel from the ONI HQ.[13] Not too long after, Noble Team was hailed by its commanding officer and was ordered to destroy Sword Base. The team was forced to enter a radiation bunker to shield themselves from the Covenant's glassing of New Alexandria. However, Kat was killed en route to the bunker by a Covenant sniper.[13]

Carter rams his Pelican into a Scarab.

Carter, along with the remaining members of Noble Team, proceeded to Sword Base and fought their way into the facility, only to have their directives revised by an unknown UNSC AI.[14] In the facility, they encountered Dr. Halsey once more. Noble Six was urged by the science officer to become the courier of a package and to deliver it safely to the UNSC Pillar of Autumn. Using Pelicans as their mode of transportation, Noble Team was split into two; Jun-A266 escorted Dr. Halsey to CASTLE Base while the others headed for the Autumn.[14]

"Six...that AI chose you. She made the right choice."
— Carter to Noble Six.

Sometime during the transport of the package to the Autumn, Carter was gravely injured in the Pelican.[2] Knowing that the delivery of the package was of the highest priority, he ordered Noble Six and Emile-A239 to drop out of the Pelican and proceed by ground while he diverted the Covenant aerial forces' attention. During the journey groundside, the two SPARTANs encountered a Scarab blocking their path. Carter, still in the Pelican, sacrificed his life by ramming into the behemoth, allowing the two SPARTANs to accomplish their objective.[2]

"You're on your own, Noble. Carter out."
— Carter's final order to Noble Team, and last words.

Carter steps in and intervenes when tension rises between his Spartans.

Carter is described as charismatic and reassuring, as well as a born leader, inspiring confidence in those under his command. He is said to be cool under pressure, with laser-like focus, even while maintaining adaptability and flexibility. Carter is also noted as being capable of interacting with non-SPARTAN personnel effectively and efficiently with low-to-no expected stress issues, and was said to be at his best while building a team.[4] As a result, he was given considerable freedom by his superiors in picking replacement personnel for his team; an exception to this was when Colonel Holland personally selected SPARTAN-B312 as a replacement for Thom-A293 after the latter's death in the Battle of Fumirole.[1]

As team commander, knows the challenge of losing members of his command, but a master of building tight-nit teams.[1] However, he was said to have "minor trust issues" due to the death of Thom-A293 under his command; Carter attributed S-A293's death to his own "inadequate team preparation" while it was evidently due to enemy action or Thom-A293's own lapse in situational awareness. Carrying the guilt over Thom's death may have also been the source of Carter's hesitation to commit to one of the replacements.[4] Despite this, Carter grew to trust Noble Six and even informed his subordinate that Cortana had made the right choice by picking him.

Carter wore a MJOLNIR Mark V Commando helmet (equipped with a HUL[3] attachment) and an Assault/Commando chest piece. He wore a Commando shoulder piece for his left shoulder and a Mk. V shoulder piece for his right shoulder. Carter also had a Tactical/TACPAD wrist piece on his left wrist and FJ/PARA knees guards. He tends to favor the M392 DMR or the MA37 assault rifle as his main weapons and is sometimes seen carrying a M6G magnum as a sidearm.