The UNSC Hopeful, (hull classification symbol AH-1007),[3] is a research facility and mobile hospital utilized by the United Nations Space Command. The ship and its captain, Vice Admiral Ysionris Jeromi, were considered legendary within the UNSC.[2]

Unlike any other ship in the UNSC fleet, the station was built from two scrapped refit stations, each a square kilometer of plate, scaffolding, and cargo trams. The two plates had been connected to make an off-center "sandwich". Due to this atypical design, it is known to many naval officers as 'the ugliest thing to ever float in zero-g', although many personnel who had been on the Hopeful describe her as 'the most beautiful thing ever to be seen'. The ship was powered by six fusion reactors.[1] It had a compensator system to reduce stress on its structure.[2]

The Hopeful is virtually always on the move, tending to wounded, assisting in civilian evacuations, and mobilizing medical care when diseases ravage the poorer colonies.[4] Due to its vulnerability the Hopeful is always accompanied by an escort. As the Human-Covenant War escalated, its normal escort was increased to five destroyers and six corvettes, with the latter modified to carry rescue vehicles.[4] 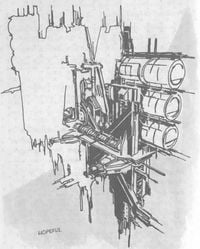 Before the onset of the Insurrection, a private medical corporation purchased two decommissioned refit stations, combined them into a single hull, and constructed a highly advanced medical facility within. In 2495, the UNSC took control of the station and added six fusion reactors and a Shaw-Fujikawa Translight Engine, turning Hopeful into the largest mobile battlefield hospital in history. It had the facilities, doctors, and supplies to treat thousands of critically injured patients at a time. With the horrors of the Human-Covenant War taking their toll on the UNSC forces, the Hopeful was always busy. In many cases, the Hopeful was known to literally 'bring the dead back to life'.[1]

In 2525, Dr. Catherine Halsey messaged her former instructor, Vice Admiral Jeromi, about a set of hypothetical augmentation experiments performed upon Bonobo chimpanzees aboard the Hopeful, much to Jeromi's displeasure at the thought of such an experiment. Halsey used the data provided by Jeromi to conduct the SPARTAN-II augmentation procedures.[5]

By the middle of the Human-Covenant War, the Hopeful had become one of the oldest and most revered ships in the UNSC fleet. By 2551, the ship had been involved in eighteen naval engagements against both insurrectionists and the Covenant, having been damaged multiple times. Since at least 2525, it had been commanded by the legendary Vice Admiral Ysionris Jeromi. The ship had taken on a near-mythical status to soldiers fighting on the front lines.[1]

In 2536, SPARTAN-III Alpha Company underwent their physical augmentation procedures, Project CHRYSANTHEMUM, on board the Hopeful.[6] After the Hopeful departed its temporary post over Reach in February 2551, Gamma Company underwent their augmentation procedures on the ship. As Gamma Company's augmentations had to be performed in the utmost secrecy, Vice Admiral Margaret Parangosky ordered that the station be berthed in Sector K-009, much to Jeromi's displeasure. Its normal escort was reduced from eleven ships to just one destroyer and a single Office of Naval Intelligence prowler.[4] Presumably, SPARTAN-III Beta Company also underwent Project CHRYSANTHEMUM on the Hopeful. On February 27, Hopeful returned to Reach, and Jeromi invited Dr. Halsey aboard for a tour of its flash-clone organ facility.[4]

In 2552, during and after the Fall of Reach, the Hopeful managed to save thousands of patients by retreating to the relative safety of Tribute even as Tribute came under attack.[3]