The fusion engines of a Paris-class heavy frigate at various levels of thrust.

The fusion drive,[1] also known as a fusion engine,[2][3] is a type of spacecraft maneuver drive[4] which serves as the primary form of sublight propulsion on most human spacecraft, whereas the Shaw-Fujikawa Translight Engine is used for travel at superluminal, or faster-than-light, speeds. The fusion drive system generates both power and direct thrust for the ship.[5]

Rear view of UNSC Pillar of Autumn, showing the thrust nozzles of its fusion engines.

The primary component of a fusion drive is an inertial electrostatic fusion reactor or a series of such reactors. The reactors on UNSC warships fuse Deuterium and Helium-3 atoms[5] to generate a stable and abundant supply of superheated plasma within a magnetic containment field.[2] The plasma is channeled into a series of exhaust manifolds, which vector it out of the ship's engine nozzles along with added water or hydrogen reaction mass to provide propulsion for the ship.[5] The drive system utilizes inertial-electrostatic containment and higher-order manifolds to mitigate fusion backblast,[6] while magnetic fields and thrust-vectoring plates are used to improve maneuverability.[5]

The main components of the fusion drive are typically located in a ship's engineering.[2] The number of fusion engines varies between ship classes. UNSC frigates are typically equipped with two primary reactors[7] and at least another two secondary reactors,[8] while Halcyon-class light cruisers are powered by an array of three fusion reactors.[9] Larger ships, such as the mobile hospital UNSC Hopeful, could possess as many as six reactors.[10] The number of engine exhausts also varies greatly; ships usually have two or more primary adjacent exhaust nozzles, and a series of smaller, secondary ones.

Significant developments were made in fusion engine technology over the course of the 26th century; the Mark II Hanley-Messer fusion engines used by Halcyon-class cruisers produced only a tenth of the power output of modern reactors as of 2552.[14]

In 2552, the UNSC Pillar of Autumn was refit with a power plant which used an experimental architecture where a single main reactor was nestled within two smaller reactor rings. When activated, the secondary reactors supercharged the main reactor, and their overlapping magnetic fields could temporarily boost the reactor output by 300 percent. In addition, the engine did not require external coolant systems like most reactors, instead neutralizing waste heat by means of a "laser-induced optical slurry of ions chilled to near-absolute zero". The more power the reactor was generating, the more supercooled particles it produced, effectively cooling itself.[15]

The Mark II Hanley-Messer DFR is a type of deuterium fusion power plant used on Halcyon-class light cruisers, which are typically equipped with three of the reactors.[16] These fusion drives are designed for bulk maneuvering rather than speed.[17] They were obsolete by 2552, providing only a tenth of the power generated by modern reactors at the time.[14]

Manufactured by Naoto Technologies,[18] the V4/L-DFR is a deuterium fusion drive equipped on Charon-class light frigates, such as UNSC Forward Unto Dawn.[19]

Manufactured by Boglin Fields,[18] the S81/X-DFR is an advanced type of fusion drive serving as the primary sublight engine of the experimental warship UNSC Infinity.[19][20] Unlike most deuterium fusion drives of human design, the S81/X-DFR is classified as a form of repulsor engine.[21] Massive in size, this engine module took fifteen years to design, build, and test.[22]

Manufactured by Boglin Fields, two Starfire-IV fusion rockets were installed on the UNSC Pillar of Autumn as part of the ship's refit for Operation: RED FLAG in 2552.[23]

Manufactured by OKB Karman, two 56K fusion drives were used by the UNSC In Amber Clad.[24]

Manufactured by Orphios Energy Systems, six Jupiter-1 maneuver drives were used by the UNSC Spirit of Fire. These were salvaged from the destroyer UNSC Calcutta and put in the Spirit in 2530.[25] 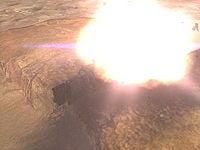 The Pillar of Autumn's reactors detonating.

Fusion drives can also be used as improvised weapons of mass destruction. A ship's captain possesses the codes necessary to initiate fusion core overload in their command neural interface, but reactor destabilization can also be initiated manually. Though the fusion reactors are protected by magnetic containment fields which surround the fusion cells, they can be destabilized by explosive ordnance once the exhaust couplings protecting the reactor vents have been retracted. Significant amount of damage to the engines will trigger a "wildcat destabilization". The reactor will then detonate within minutes, generating a temperature of nearly 100,000,000 degrees. The most notable instance of this was when John-117 destroyed Installation 04 by overloading the fusion reactors of the UNSC Pillar of Autumn.[2] The explosion was later revealed to be similar to a supernova to the point that it created a new element on a surviving shard of the ring.[26]