The Paris-class heavy frigate is a classification of fleet escort ship in service with the UNSC Navy.[6] The ship was introduced only two years prior to the outbreak of the Human-Covenant War, but was considered extremely effective on a tonne-for-tonne basis - resulting in it rapidly becoming one of the most-constructed ships in the navy by the war's end.[4] The Paris saw notable employment in the final battles of the war - the Fall of Reach and the Battle for Earth.[12]

The Paris follows a design lineage established with its forebears, the Charon-class and Stalwart-class light frigates. The ship is predominantly identified by the two primary booms on its fore, the upper of which containing the ships's primary 65P8V1 Magnetic Accelerator Cannon - the primary weapon of which the ship is built around. These hull booms are flanked by two horizontal modules which run a third of the ship's length, and each contain the housings and mechanisms for five of the M870 Rampart point-defence turrets (three located on the upper hull, two below) and six M2950 Harpoon nuclear missile silos, respectively.[4]

The rear half of the ship contains the ship's externally-mounted bridge on the top of the ship, providing overwatch of the battle space around the frigate, and a lower mast that houses the ship's primary hangar bay.[2] Each side of the ship contains a "wing" each respectively mounting a single primary and three secondary fusion drives. These serve as the frigate's primary sub-light maneuver drive system. The middle portion of the ship between the engines mounts a further two M870 Rampart guns and several missile silos. Overall, the ship is coated in a layer of Titanium-A battle plating -[2] thicker in volume that the standard layers found on lighter frigate types.[7] The ship's bridge contains two standard airlocks on either side, that allow for umbilical docking with other ships or space stations for crew ingress/egress.

Paris-class frigates can be constructed at refit stations such as Anchor 9. Frigates are usually constructed docked with the station itself, though for increased manufactruing capability free-floating construction docks can also be established to support the refit station's operation.[9]

Paris-class frigates are more heavily armed than most UNSC frigates.[7] Like all frigates in service with the UNSC, the Paris-class' primary armament is a single light[11] 65P8V1 Magnetic Accelerator Cannon. For a secondary weapon, the frigate is also armed with twenty-six M58 Archer missile pods which, while ineffective against energy shielding and vulnerable to Covenant point defenses, have proven potent against enemy armor. Paris-class frigates have twelve M870 point defense guns located across the hull as a tertiary armament.[6][2][3] The additional firepower afforded by the point-defence guns mean that it can easily handle Covenant fighter craft and can hold its own against small Covenant warships, such as the Ceudar-pattern heavy corvette.[9] If competently crewed and strategically used, a Paris is even capable of engaging a ship as large as a Ket-pattern battlecruiser alone - though this is an extremely risky strategy.[4] Supplementing the main weapons of the ship are twelve M2950 Harpoon nuclear missile silos, located in the centre of the ship.[4] These vertical-launch silos can be used to deploy the nuclear weapons if needed, though some ships may carry Shiva-class nuclear missiles either in addition to the Harpoons, or instead of them.[10]

The Paris' focus on armaments over cargo capacity leaves it with a minimal capacity for carrying ground troops or strike fightercraft, though this has mattered little for the Paris - with the frigate proving itself more than adept in facing down ostensibly superior forces in space warfare. If in the hands of a skilled crew, a Paris-class is capable of taking on and winning against even a Covenant battlecruiser through a series of strategic feints and attacks.[4] 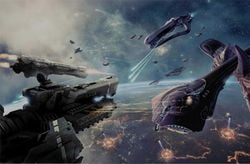 Where its lighter cousins are focused on defensive and escort roles, the Paris-class mounts additional armour plating and weaponry to instead focus on escort and offensive roles.[6] Like its successor, the Mulsanne-class light frigate, it is optimised for swift and aggressive attack actions.[13] It is a core component of many of the UNSC Navy's standardised tactical formations. These include the following:

These tactical formations can be "plugged together" with other formation types to form specialised forms of battle group. Those employing Paris-class frigates include the following:

Paris-class frigates among myriad other ships in the defence of Camber.

The Paris-class heavy frigate was the third of the UNSC Navy's prominent Covenant-war era frigate classes to enter into service, first coming online in 2523 - two years prior to the outbreak of the war. The Paris was quick to establish itself as an extremely capable combatant on a tonne-for-tonne basis, especially when compared to other ships of the UNSC Navy. As such, by the later years of the war the Paris was being constructed in huge numbers and dominated the frigate construction yards.[4] A Paris-class frigate, UNSC Commonwealth, was used in one of the earliest engagements of the war,[10][16] though by 2552 had been decommissioned and brought to the Asźod ship breaking yards for final dispensation.[17] They continued to be used in multiple battles of the war, such as the Battle of Camber.[18]

A frigate firing its point-defences during the glassing of Reach.

Late in the war, vast amounts of Paris-class frigates were employed throughout the Epsilon Eridani Fleet, and were used to defend the Epsilon Eridani system's various colony worlds during the space campaigns of the Fall of Reach.[7] Early in the Reach campaign, frigates UNSC Grafton and UNSC Saratoga were used to provide fire atmospheric fire support for ground forces during the Battle at Szurdok Ridge,[1] with another Paris-class - UNSC Savannah - taking a key role during the pivotal Operation: UPPER CUT. While the Fleet of Valiant Prudence were distracted by Operation: LEFT JAB led by Vice Admiral Michael Stanforth, Savannah's slipspace drive was removed from the ship and jury-rigged into an improvised bomb used to destroy the Sh'wada-pattern supercarrier, Long Night of Solace. During the engagement, Savannah provided overwatch fire support for the YSS-1000 Sabre strikecraft, and worked to jam the communications of Ceudar-pattern heavy corvette Ardent Prayer - though ultimately succumbed to Prayer's plasma cannons.[9] Although planet was ultimately glassed, Paris-class frigates continued to operate in the Reach area of operations for several days afterward, with one such vessel continuing to engage Covenant spacecraft over the remains of Gamma Station.[19]

Several Paris-class frigates were able to escape the Fall of Reach relatively intact. One such vessel, UNSC Promise of Dawn, escaped with the Smart AI Gabriela aboard, but ultimately crash-landed on Sephune III with its crew stranded on the planet - with a signal from the ship only intercepted later in 2553.[20] Another ship, UNSC Gettysburg, was recovered from the debris fields over Reach by Blue Team and combined with their stolen Ruma-pattern light carrier Ascendant Justice to form an improvised vehicle for getting back to human space.[21][22] During the final months of the war, Paris-class frigates constituted a large portion of the UNSC Home Fleet, and were used to defend Earth during the opening stages of the Battle for Earth.[12]

The post-war era saw the introduction of a number of frigate classes to succeed the Paris - especially with the distinction between "light" and "heavy" frigates having become minimal for the remaining fleets of Earth.[4] The Mulsanne-class light frigate has been introduced to take over the Paris' role in aggressive and swift frigate-scale attack, albeit armed with directed-energy weapon rather than a MAC system.[13] Late in the war, the Strident-class heavy frigate was introduced to take over the heavy frigate role, though these ships have yet to entirely replace the Paris design. As late as 2556, vessels such as UNSC Cascadia were deployed on lone missions on post-glassing worlds,[23] with numerous Paris-class frigates later serving as part of Expeditionary Strike Group 1 to escort the UNSC flagship UNSC Infinity on its first deployment to Requiem.[24][25] Paris-class frigates continued to serve alongside Infinity as late as mid-2558, with vessels of the class deployed to help secure the Station at Oth Lodon.[26]

Although debuting in Halo: Reach, the Paris-class was originally designed for inclusion in Halo 3 as a conceptual design for the UNSC Forward Unto Dawn/ Charon-class light frigate.[27][28] During production, the class known internally as the Stalwart (the name of the frigate class introduced in Halo 2)[29], though was ultimately named the Paris-class with the release of the Essential Visual Guide reprint in 2011. The class was also known as the Stalwart during the production of Halo 4: Forward Unto Dawn.[30]

The concept work for the frigate produced labels the subject spacecraft as the UNSC Andraste, and provides a number of labels and notations to various features on the ship. This artwork displays a number of correlating details with the final design, though also several differences with established canon such as the presence of railgun turrets. The presence of the Harpoon missiles mentioned in the art was later canonised in the Halo Encyclopedia (2022 edition), as the M2950 Harpoon nuclear missile.[4]

Halo: Reach also retroactively confirmed the class of the UNSC Commonwealth, a vessel featured in the original Halo: The Fall of Reach novel but never given a specific class. Curiously, the novel (and its animated adaptation) feature the ship deploying a squadron of GA-TL1 Longsword fighters, and indicating that the ship is storing a number more. With the model provided in-game, this would be impossible, as there are no single points on which the 60 metre wingspan Longsword is capable of fitting anywhere inside the frigate. This is an example of "Early Installment Weirdness" - in which details established in an early work do not correlate with details solidified in its successors. The Commonwealth in the original novel was not written with the 2010 game's design in mind, and this this detail does not fit. The animated series does depict the Longswords launching what appears to be downward from the rear lower mast, though the visual accuracy of the series is suspect. It may be possible that in canon, the Longswords were simply externally docked to the Commonwealth.

In the Halo 2: Anniversary remaster of the Halo 2 level Cairo Station, Paris-class frigates replace the Stalwart-class light frigates seen in the skybox of the mission, and can be viewed flying into deep space to engage the Fleet of Sacred Consecration.