The UNSC Commonwealth was a Paris-class heavy frigate of the UNSC Navy.[1] In 2525, its commanding officer was Captain Wallace.[2] 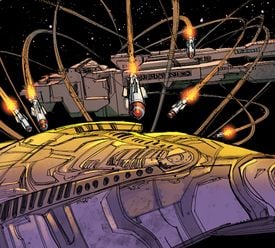 The Commonwealth firing Archer missiles at the Unrelenting.

In 2525, the Commonwealth was used to transport the SPARTAN-IIs along with Catherine Halsey to the Damascus Testing Facility on the planet Chi Ceti IV. While transporting the crew to the installation, the ship came under attack by a Covenant Zanar-pattern light cruiser, Unrelenting. During the engagement, the Commonwealth was able to fight off the cruiser long enough to perform a flyby orbit of Chi Ceti IV to deploy its crew onto the planet, intending to then return to a point in space 20 million kilometres from the planet to make repairs and act as bait in the event that the cruiser returned.[2] While the crew were on the ground, Commonwealth continued to engage the ship, sustaining heavy damage including the following:

Ultimately, with the assistance of Blue Team and their new MJOLNIR Mark IV armor, the Commonwealth was able to destroy the light cruiser.[12] The Commonwealth, however, was severely damaged in the engagement and shortly thereafter rendezvoused with the cruiser UNSC Persian Gate to transfer the Spartans and Dr. Halsey to the ship.[13] Despite the damage incurred, the Commonwealth was able to return to Reach for repairs and then presumably returned to service against the Covenant's advances among the Outer Colonies.[14][15]

Some time between the Chi Ceti incident and 2552, the Commonwealth was decommissioned by the UNSC and was landed at the Asźod ship breaking yards to be scrapped. When the Epsilon Eridani system came under attack in August of 2552, the Commonwealth became a battlefield venue between the ground forces of the UNSC and the Covenant during the Battle of Asźod. During the conflict, SPARTAN-B312 and Emile-A239 pushed through the ship's stripped wreckage in order to deliver a vital package to the UNSC Pillar of Autumn.[16] At the time of the attack, the Commonwealth was well into being scrapped. Already, its entire port-side launch deck was removed, along with its port engines. Its bridge had been taken out, and holes were made on its underbelly to allow staircases to be fitted in for the technicians assigned to take it apart.[1]