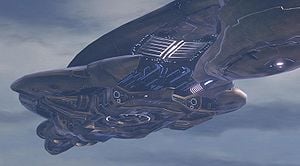 A hangar bay is a large room built to store fighters, troop transports, and other equipment that are on board a ship or space station. A hangar bay used to store shuttles or dropships is sometimes referred to as a shuttle bay or launch bay.[1] Almost every Covenant or UNSC ship has a hangar bay. Ships that have the largest hangar bays are usually identified as carriers; such as the Covenant assault carrier, Shadow of Intent. Usually, the hangar bay of a ship is located in the middle or the back of a ship.[2][3][4]

How many fighters and troop transports that fit in the hangar bay depends on the size of the bay and the size of the ship or station; for example, a Covenant assault carrier's hangar bay is large enough to fit an entire UNSC frigate,[3] while a UNSC corvette's hangar can only store a small ship such as a SKT-13 Shuttlecraft.[5] The shuttle bays on Covenant Ket-pattern battlecruisers are large, with multiple levels and enough space to park two Taaku Xur-pattern Spirits, two Type-31 "Seraph" fighters, or eight Type-26 "Banshee" Ground Support Aircraft.

On larger UNSC warships such as the Valiant-class super-heavy cruiser, the hangar bay serves as "Zero Deck", by which all other decks are measured. All decks above the hangar are named as a "level" starting at Level One and going as high as needed, while all decks below the hangar are considered "belowdecks" and labelled First Deck, Second Deck, Third Deck etc.[6] The Marathon-class heavy cruiser can reconfigure its hangar bays to sacrifice armament-carrying capacity and instead serve as a light carrier when needed.[7] Hangars on some lighter UNSC warships such as Charon-class light frigate double as cargo bays, being able to lower vehicles or cargo directly to the ground through elevators in the hangar floor.[3] By 2557, even larger ships such as the UNSC Infinity had external cargo elevators connected to their hangar bays to allow for lifting of supplies and armaments onto a planetary surface.[8] By 2552, some UNSC ships and stations also use vacuum-sealing energy fields in their hangar bays.[9]

Covenant hangar bays use energy barriers that serve the purpose of separating the pressurized interior of the ship from the vacuum of space, also doubling as energy shields that can prevent ships from entering. Some ships such as Covenant corvettes also possess physical hangar doors in addition to the energy field.[10]