This article is about the Covenant military rank. For the Halo: Reach multiplayer map, see Zealot (map). 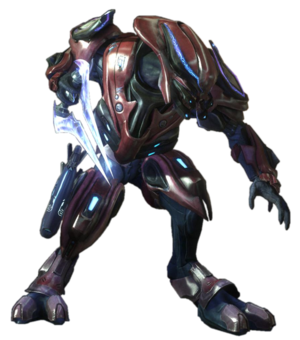 "The true devotee honors our name with actions, not words."
— The Sangheili Zealot's mantra.[1]

Zealot is a military rank of high-ranking warriors in the Covenant military, as well as some of its splinter factions during the Blooding Years.[2] They were supervised and deployed by the Ministry of Fervent Intercession,[3] with their organization divided into multiple chapters.[2][4] Zealots were among the most devout worshipers of the Forerunners.[5] After the dissolution of the Covenant and the abandonment of its religion, some continued Forerunner worship.

"The Path is strict, Jora — it brooks no deviation, no remorse. We are zealots. We serve the Way. These are our orders. We do not question them."
— Thel 'Vadamee to Jora 'Konaree[6]

Zealots are greatly experienced and unparalleled in combat skill. Equipped with advanced armor systems and equipment, this title is almost exclusively used by the most resilient and powerful Sangheili fighters.[3] Although all Sangheili males are trained in the arts of combat from a young age, Sangheili believe future Zealots are born with an innate desire to kill.[5]

Zealots may serve in a variety of command roles ranging from Shipmaster[7][6] to Supreme Commander.[8] The rank of Field Marshal is exclusive to the Zealot class. Field Marshals hold supreme authority over Covenant land forces, effectively making them the groundside counterpart to a Fleet Master or Supreme Commander; Field Marshals are also occasionally tasked with leading Zealot strike teams.[9] Sangheili Zealot Assassins are specialists who operate with teams of stealth troopers.[10]

Unlike the majority of the Covenant's conventional military forces, which fell under the authority of the Ministry of Resolution, the Zealots were a separate group that reported to the Ministry of Fervent Intercession. Within the Ministry existed a number of chapters (such as the Devoted Sentries), many of which adhered to particular interpretations of ancient codes of honor or debt-packs.[4] Some of these chapters traced their lineage back to long before the rise of the Covenant.[11] The Zealots' internal structure, rankings, and equipment varied from chapter to chapter and from fleet to fleet.[2] The ministry deployed small teams of Zealots during all significant engagements to locate, analyze, and amass intelligence regarding reliquary sites, as well as to recover Forerunner artifacts or otherwise important data.[3][12]

During the Human-Covenant War, many Zealots were assigned to battlefield duties in order to directly partake in the destruction of a species the Covenant viewed as heretical.[3] Artisan-armorers of the Covenant sometimes allied themselves particularly with the Zealot orders, and would produce specialty equipment such as the Suspa Al-pattern drop pod specifically for only the most pious of commanders. When deploying into battle, only warriors from within the Zealot ranks, or those seeking to aspire to join them, would be permitted to employ these insertion pods.[13]

After their betrayal by the High Prophets, some worshipped the Foreurnners without belief in the Great Journey, while others forsook the religion all together. The role had become a more general rank of combat specialization, similar to how Sangheili Honor Guards forsook their original purpose after the Prophets had betrayed them.[citation needed] By 2558, some Zealots continued to serve within various Covenant remnant factions, including those which remained religiously devoted to the Forerunners following the hegemony's collapse. Despite still having a combat niche, these Zealots served in political and social leadership positions (at least within Jul 'Mdama's Covenant), filling all roles previously occupied by the San'Shyuum.[14][15] Zealot loyalties remain divided amongst the Covenant successor states, and now exercise less discretion in judging the worthy to join their ranks.[13]

Zealots have access to a variety of armor types and styles, including the Ceremonial battle harness or even the Infiltration harness (which is used by Special Operations and Stealth Sangheili),[17] and reflecting the multiple roles encompassed by those who hold the title.[4] The armor worn by a Zealot can be reflective of his chapter or fleet assignment.[2] Their suits have also variety of coloration, including blue,[18] although Zealots most commonly wear ornate maroon armor that, while intricate, is more subdued in design than the suits worn by Sangheili of lower ranks.[1] By 2558, the silver-white color scheme (with black trim) may have been also worn by Ultras, although whatever this color configuration is used as the Ultra variant for the Zealot-class internal ranking structure is unknown.[19]

Zealot Field Masters in command positions,[20] including those attached to regular Covenant military forces, wore armors distinguished by their gold coloration (indicating a command role)[21][22] and the nearly peerless durability of their energy shields, like the suits worn by lower-ranking Generals.[23][24] Despite the availability of specialized armor styles, many Zealot Field Masters wore gold-colored typical combat harnesses during the war with humanity.[25] Like harnesses worn by Special Operations and Stealth Sangheili, Zealot armors are equipped with active camouflage.[26][27][28]

Field Marshals wear a dark magenta-colored modified version of the Ceremonial battle harness; the front of the helmet has two horn-like prongs and the pauldrons are wider.[1] Zealot Supreme Commanders may wear a similarly colored doarmir fur cloak with their armor.[8][26][Note 1]

Another armor type is derived from traditional designs worn on Hesduros, and bears some similarities to the Infiltration harness.[15] This style was in use by 2526,[29] though the prevalence of its issue relative to other wartime models is unclear. This suit has a very organic, almost chitinous appearance, reflecting its origin on Hesduros.[15] The helmet, which encompasses most of the wearer's face, vaguely resembles those worn by the Ascetics and Covenant Special Operations forces. A cross-shaped pattern of purple, or blue, insets faces outward from a central point on the helmet; the helmets worn by Merg Vol and Jul 'Mdama emit distinctive holograms, perhaps produced by their aforementioned insets. A blade-like "talon", derived from the armor worn by kaidons on Hesduros, is located on the inner toe of either boot. The harness also has protective hand-armor, and raised foil-arcs on its back.[15] It is commonly worn by Zealots serving various remnant factions in the wake of the Covenant's collapse, most notably the body led by Jul 'Mdama, which was formed on Hesduros. In addition to the standard maroon coloration, this version is also produced in blue[30][31] and gold.[32][19]

Sangheili Zealots were typically armed with Type-1 energy sword, although in some instances, they made use of other weapons, such as at least one plasma rifle, a concussion rifle, a fuel rod gun, or a carbine.[23][1][28] Various Zealot veterans also did often pilot gold-colored specialized vehicles, such as ornate Temple variants of Wraith, Ghosts and Banshees, with the latter used by the sky-chevaliers.[33][34][35]

Halo: The Essential Visual Guide page 100 mentions the existence of a hypothetical Kig-Yar Zealot rank - something which is at odds with the way the Kig-Yar have been presented in all other sources before and since- there are currently no known Kig-Yar Zealots mentioned in the canon. This misconception originates with the character of Zhar from the book Halo: Contact Harvest, who was once thought to be a Zealot, but this was based on a misreading of an insult directed toward Dadab, an Unggoy Deacon. This original misconception was later reproduced on Halopedia, and ultimately made its way into this sourcebook. Given the title has no basis in canon except for this original misconception, and has not been indicated to exist since with books such as the Halo Encyclopedia (2022 edition) only reinforcing the title of Zealot as one of exclusively Sangheili usage.