Artisan-armorers, also sometimes known as artisan-engineers,[1] were Covenant technicians, designers, and forgemasters who operated the empire's assembly forges and maintained design patterns.[2] Sangheili artisan-armorers continue to operate in a similar capacity even in the absence of the Covenant. Sangheili artisans and architects take much of their inspiration from nature, both in the structures they raise from the ground and the ships they take to the stars.[3]

Before the Covenant, Sangheili artisans designed many things, such as the Hekar Taa-pattern blockade runner, the hull designs of which was based on the arkon taa, a carnivorous fish from Sanghelios.[3] Artisan-armorers were responsible for implementing design patterns to produce matériel for the Covenant, then, for thousands of years. Occasionally, influential clients and heroes of the Covenant—who were considered to be above Ministry sanction—were able to commission Sangheili artisan-armorers to produce custom variants of the Okarda'phaa-pattern plasma rifle to suit their needs.[1] The Kewu R'shi'k-pattern plasma rifle variant was originally manufactured at the Sacred Promissory assembly forges in preparation for the High Prophet of Truth's takeover of the Covenant. Under its crimson plating, the artisan-engineers in Truth's employ were allowed to make modifications to the rifle's sacred design pattern specifically tailored to the aggressive nature of the Jiralhanae.[1] 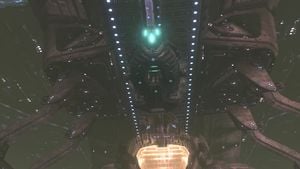 Some Sangheili artisan-armorers, such as those of Cherras Keep, maintained greater loyalty to individual warriors rather than the Covenant Empire itself.[4]

In the wake of the Covenant's demise in late 2552, Sangheili artisan-armorers garnered renewed interest in discovering the properties of blamite. Many pre-Covenant design patterns incorporating blamite were uncovered to assist in their research.[5] Sangheili artisans on remote colonies modernized the Invader harness to use it for hunting down Jiralhanae raiding packs.[6] The creation of the Type-57B carbine variant known as the Blood of Suban is a testament to the newfound avarice that accompanied the genius and talent of artisan-armorers on Suban following the war.[7] The creator of the Kelos'vaarda-pattern storm rifle known as Fury was a Sangheili artisan of sublime genius and skill, though he eventually shunned his family's traditional ties with Lodam Armory to perfect the art of the kill and the craftsmanship of orbital assaults.[8]

The alliance between the Swords of Sanghelios and the Unified Earth Government has resulted in collaborations between Sangheili artisan-armorers and humans. Notably, the HELIOSKRILL variant of GEN2 Mjolnir was designed by a Sangheili artisan-armorer from the Kolaar Manufactorum who had managed to reverse-engineer the Mjolnir armor in an effort to test her skills against humanity's best armor manufacturers.[9] By 2558, this burgeoning relationship had allowed ONI's Xeno-Materials Exploitation Group deeper insight into Covenant dummy plugs and for the partial replication of cryptic Forerunner sub-mechanisms and interface signals. As a result, the morph sight was adapted for a number of United Nations Space Command weapons.[10]