Suban is one of the two massive natural satellites of Sanghelios, along with Qikost.[1] Suban is reddish in color[4] and is referred to as the "blood-moon of Sanghelios."[5] The large size of both Suban and Qikost have great effects of the tides on Sanghelios.[6][7]

The exotic metastable crystals known as blamite, used to manufacture the ammunition for the Needler and the Needle Rifle, are mined from Suban.[9][7] Veins of blamite are found throughout the moon's interior, and Suban is the only known location where these crystals can be found.[10][7] An example of fauna indigenous to Suban is the qoerith slug.[11] There is also at least one jungle on Suban, at the crater of Kovokel.[12]

A Sangheili city on Suban. 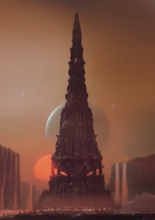 Prior to the formation of the Covenant between the Sangheili and San'Shyuum, Suban held significant religious importance for the Sangheili. Its Spire of Miatistina was fabled to serve as a spiritual convergence point between of the wills of the gods and their celestial counterparts Urs, Fied, and Joori.[13]

In 938 BCE, the San'Shyuum arrived at the Sangheili colony world of Ulgethon, an event that ultimately sparked a conflict between the two species that would last decades. At some point following 876 BCE, the San'Shyuum had brought their Dreadnought to the Urs system, ravaging Sanghelios and its moons. However, as the Sangheili had finally resolved to use their holy Forerunner weapons on their attackers out of desperation, they managed to bring the keyship down on Suban. There, the Sangheili kept it and the San'Shyuum within trapped for some time using gravity anchors, debating whether they should simply destroy the vessel outright or risk breaching it to take it for themselves. Ultimately, following a coup among the San'Shyuum in the Dreadnought, an unarmed delegation was sent to the Sangheili in 852 BCE, and the two species forged a truce, leading to the formation of the Covenant.[14] Despite the worship of the Forerunners being central to the Covenant, an element of the Writ of Union permitted orthodox lacuna monks and select ascetic priests to continue to observe ancient religious practices at the Spire of Miatistina. However, these agreements would rarely be honored as the centuries passed.[13]

Within the induction of the Sangheili and their colonies into the Covenant, Suban became a the sole production site for the ammunition used within needle-based weaponry,[9] due to its status as the only known location where the blamite crystals can be found.[10][7] The moon also became host to several important armories that served as a vital component of the Covenant war machine.[7] Following the collapse of the Covenant, the Spire of Miatistina has seen a resurgence in activity as once-reduced religious orders and dormant traditions are revived.[13]

After the beginning of the Blooding Years, a large portion of Sanghelios' population fled to Suban, Qikost, and other Sangheili colonies for refuge.[8] During this time of unrest for the Sangheili people, Suban served as a neutral safe harbor.[7]

Following the start of the Reclamation in late 2558, the UNSC Infinity set up a brief rendezvous on the far side of Suban with the remaining UNSC forces on the planet. Using a Pelican recovered from Genesis by Blue Team and Fireteam Osiris, they were able to reach the Infinity without being intercepted by Created forces.[15] Ultimately, Suban suffered only minimal damage during Cortana's subjugation of Sanghelios.[7]

With Cortana's final demise and the subsequent diminishing of the Created threat, Suban has once again become a focal point within the Urs system. Its unique supply of blamite has caught the attention of numerous factions seeking to capitalize on the moon's weakened security. While the Swords of Sanghelios has pledged to support local keeps in protecting the most vital mining sites, the struggle to maintain hold of Suban's resources has proved difficult.[7]

The blamite mining clans of Suban are a predominant industry on the moon, and maintain strong trade alliances with Kig-Yar scouts and snipers - who often prefer Subanese weaponry such as the Gadulo-pattern needle rifle.[16]