This article is about the SPARTAN fireteam. For other uses of the term "Noble", see Noble (disambiguation).

"You know as well as I do that we wind up with some that she would have chosen—not just kids unlucky enough to survive a glassing. Orders are still being followed and those Spartans are in the field, but they are armed as SPARTANs—and they are making a difference."
— LCDR Kurt Ambrose to SCPO Franklin Mendez[1]

Noble Team,[2] more formally styled as NOBLE Team[3] and sometimes referred to as Team Noble or simply NOBLE, was a fireteam-sized unit composed mostly of Cat-2 Spartan-III supersoldiers and one Spartan-II commando as of 2552. Unlike most Spartan teams which are subordinate to Naval Special Weapons,[4][5] Noble Team was under the operational control of the UNSC Army's Special Warfare Group Three, although as Spartans, its members were still part of the Navy.[5]

Noble Team was primarily composed of SPARTAN-IIIs pulled out of their main companies by Lieutenant Commander Kurt Ambrose and Senior Chief Petty Officer Franklin Mendez before large-scale operations where the companies were mostly wiped out, Operation: PROMETHEUS in the case of Alpha Company and Operation: TORPEDO with Beta Company.[1]

Prior to the Fall of Reach, Noble Team had managed to survive countless battles, always coming back from suicide assignments, but not without a cost.[6] Only two original members of the team were still living by 2552: Carter-A259 and Catherine-B320.[7]

Noble Team also operated with non-Spartan military personnel more extensively than other Spartan teams. To grant them more operational freedom when interacting with regular military personnel, the member of Noble Team had been given higher ranks than most of the Spartans by their CO.[8] In 2552, the team was under the command of Colonel Urban Holland of the UNSC Army.[9] 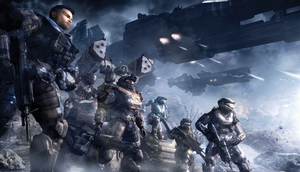 Other SPARTANs were constantly kept on rotation for the team. When one member fell in the line of duty, a new SPARTAN would be brought in as a replacement.

"Wouldn't be a Noble mission if it were easy."
— Carter about Noble team's operations[16]

Noble Team during the Fall of Reach.

Noble Team was formed sometime after SPARTAN-III Beta Company graduated, with Catherine-B320 being pulled from the company shortly before Operation: TORPEDO in July 2545.[17] Eventually, she would become a founding member of Noble Team, along with Carter-A259—the leader of this new unit—and several other Spartans.[7]

Noble Team participated in several missions during the Human-Covenant War. By 2552, NOBLE Team operated under the command of Colonel Urban Holland, aiding UNSC Army teams in operations throughout the Inner Colonies.[18] On April 22, 2552, the team partook in an operation to destroy a Covenant battlecruiser during the Battle of Fumirole. The operation was successful, but at the cost of Thom-A293. Following Thom's death, Noble Team was assigned to the Inner Colony of Reach to hunt down an off-world rebel leader.[18] Some time after their arrival on Reach, the team received a replacement for Thom-A293 in the form of SPARTAN-B312.

During the Fall of Reach on July 24, 2552, Noble Team was among the first human forces to engage the Covenant on the planet after they were sent to investigate a communications disruption at the Visegrad Relay. Two days later, they were sent to defend ONI's Sword Base, and were debriefed by Dr. Halsey afterward. In the following weeks, Noble Team split up several times, forming smaller splinter teams.

Two and a half weeks later, Noble Team conducted a night-time reconnaissance mission in Covenant-occupied territory, assessing the Covenant's deployments on the planet. The next day, they partook in the Battle of Viery along with numerous other UNSC units. After the supercarrier Long Night of Solace revealed itself, Noble Team came up with an operation to destroy the ship. The mission was a success, at the cost of Jorge-052 who sacrificed himself to destroy the supercarrier.[13]

On August 23, Noble Team fought in the Siege of New Alexandria and eventually regrouped in the ruins of the Olympic Tower. The Covenant soon began glassing the area, and Kat-B320 was killed by sniper fire before the team could reach a fallout bunker.[11] On August 29, the team was sent to demolish Sword Base to prevent the sensitive data within from falling into Covenant hands. After fighting their way inside, the team's mission was changed by Halsey, who assigned them to deliver a high priority package to the UNSC Pillar of Autumn to ensure that humanity would have a fighting chance against the Covenant and future enemies.

Jun left to escort Halsey to CASTLE Base, while the rest of the team headed for the ship-breaking yards in Asźod to deliver the package.[16] Once there, Carter sacrificed his life by ramming his Pelican into a Scarab preparing to fire on Emile and Six. Noble Six eventually managed to deliver the package to Captain Keyes, while Emile was killed by a team of Sangheili Zealots. Noble Six stayed behind, and ensured the Pillar of Autumn's successful escape by using a mass driver to destroy an approaching Covenant cruiser.[10] Not long after, Six was eventually overwhelmed and killed by Sangheili warriors, leaving Jun as the only surviving member.[14]

The NOBLE, Intruder, Vigilant, Wrath, and Indomitable-classes of the GEN2 MJOLNIR line were created and named in honor of them.[19]

Sometime after humanity returned to Reach, a memorial for Noble Team was erected in Hősök tere in New Alexandria.

On January 15, 2610 a replica of the Reach War Memorial statue made by Big M Studio was sent from a former ONI agent to his cousin to be given to the curator of the Museum of Humanity, Ms. Bjarne.[20]