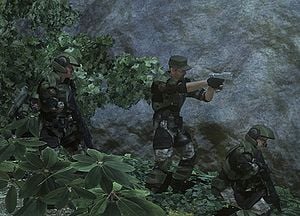 A Marine rifle team in Kenya

A fireteam is the smallest organization that ground forces are assigned to in the UNSC Army, Marine Corps and Spartan branch. As the smallest unit, it serves as the base upon which all other units are organized. The closest organizational unit in the Covenant military is known as a lance.

The concept of the fireteam is based on the need for tactical flexibility in infantry operations. They generally consist of approximately four soldiers or Marines who are formed into a squad. Generally, a squad contains three fireteams.

A fireteam is capable of autonomous operations as part of a larger unit. Successful fireteam employment relies on quality small unit training for troops, experience of its members operating together, sufficient communications infrastructure, and a quality non-commissioned officer corps to provide tactical leadership for the team.

Under the UNICOM rank structure, Fireteams are led by an E-4 Corporal, with an E3 Lance Corporal serving as the Fireteam Assistant.[1]

On some occasions, some Fireteam that has been disbanded, mostly lack of members because of reassignment, killed in action, resign, or incarcerated, may often be reinstated again based on higher-up decisions or when the previous fireteam leader request to put the former member together once more. Alpha-Nine, an ODST squad formed by Edward Buck disbanded for four years is now reinstated as Spartan Fireteam.

In the Spartan Operations branch, Spartans are typically divided into fireteams of 4-5 personnel. Spartan-IV fireteams are led by a Spartan with the rank of Fireteam Leader, roughly analogous to a UNSC Captain.[2]