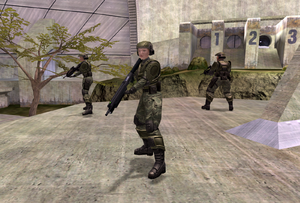 A battalion is a military unit of the UNSC Army and Marine Corps.

A battalion consists of four companies, plus a group of personnel assigned as "Battalion Headquarters Section", for 800 men in total.[1] Under the UNICOM rank structure, a battalion is commanded by an O-5 Lieutenant Colonel, with an O-4 Major serving as a battalion's Executive Officer (XO).[2] The battalion will also have a "first sergeant", usually a Gunnery Sergeant[1], First Sergeant[2] or above.[1] Three battalions comprise a Regiment.[1]

In the UNSC Army, Battalions allocate Fire Support Teams as part of the battalion's offensive/ defensive plans. Their loadout is usually tailored to their mission, terrain, and expected enemy composition. In defensive operations they provide overwatching support-by-fire, while on the offense they engage enemy vehicles and heavy infantry.[3]