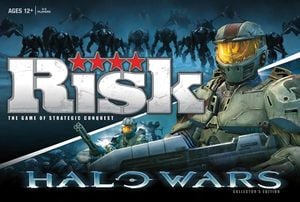 Box art for the Halo Wars edition of Risk.

Risk is a strategic board game produced by Hasbro. The objective of the game is "world domination," or "to occupy every territory on the board and in so doing, eliminate all other players." Players control armies with which they attempt to capture territories from other players, with results determined by dice rolls. Two Halo-themed Risk games have been produced, one based on Halo Wars and one on Halo: Combat Evolved Anniversary.

The trailer for ''Risk: Halo Wars Collector's Edition''.
RISK: Halo Wars Collector's Edition is a Halo Wars-themed version of Risk produced by USAopoly.[1] It features three playable factions - the UNSC, the Covenant and the Flood - with 250 game pieces, and allows players to capture 42 territories in six sectors, battling for supremacy of Arcadia. The pieces include Marines, Scorpion tanks, SPARTAN-IIs and UNSC firebases. The Covenant's pieces are Grunts, Wraiths, and Arbiters, along with Covenant command bases. Flood pieces are Infection forms, Carrier forms, Juggernauts, and Proto-Graveminds. Despite being named the Juggernaut, the Flood unit in question bears more semblance to the Halo Wars Thrasher form in-game unit than the canon Juggernaut enemy type found in Halo: Fireteam Raven and cut from Halo 2.

The game's box art and map were created by Adam Sblendorio.[2] The map's continents and territories were named by Graeme Devine and the team at Ensemble Studios.[3] Devine named one of the territories - Roque - after his daughter.[4] The board game's continent names have since been used in canon media.

The rules PDF for the Legendary Edition is hosted online here (backup).