The Proto-Gravemind, also known as the Brain Form[1] or the Proto-Compound Intelligence,[2] is an advanced Flood form created from the biomass of the most intelligent living organisms available, with the ultimate goal of creating a fully-functional Gravemind.

The infected Minister of Etiology, reduced to a disembodied head, while being absorbed into a Proto-Gravemind.

Proto-Graveminds are created when the Flood has amassed sufficient bodies and minds to become sentient. In order to create a viable "mind", large numbers of Flood forms and corpses are merged into a globular mass, which uses the combined knowledge derived from each host. They are usually formed in order to handle advanced tasks, such as piloting a starship, in which case Flood forms will merge as many hosts as possible with that knowledge, such as former pilots and officers. Rather than completely destroying a victim's consciousness, as a normal Flood form generally does, it interrogates its victims slowly, allowing their nervous systems to feed it information. The form tortures the host's mind with a loud buzzing sound, thus erasing all thought. Only after the host is stripped of all knowledge is the host killed by the Proto-Gravemind, although it is sometimes possible for a host to die before the Flood form has a chance to assimilate all of its memories.[3]

Presumably due to their knowledge and high level of intelligence, San'Shyuum are sometimes used to form the core "mind" of a Proto-Gravemind, such as the Minister of Etiology aboard Infinite Succor.[4]

Proto-Graveminds often pilot complex vehicles that require trained pilots, such as space-borne vessels. While combat forms can easily, albeit clumsily, pilot smaller vehicles like Warthogs, Scorpions, Wraiths, and Ghosts, Proto-Graveminds are needed for larger vehicles such as a starship. Since the Proto-Gravemind is stationary, it is likely that it directs nearby combat forms to pilot the ships, similar to the way a fully-formed Gravemind will direct Flood forms to execute battle strategies or other complex tasks. 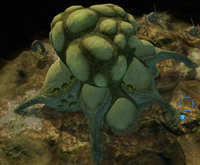 Unlike all other known Flood forms, Proto-Graveminds are immobile and passive in combat. They have never been observed to move on their own, even when combat forms are fighting nearby. In fact, even when John-117 punched through the side of the Proto-Gravemind present aboard the Truth and Reconciliation during the Battle of Installation 04, the Flood form did not react at all; it is likely that until the transformation into a true Gravemind is complete, Proto-Graveminds are nothing more than an amalgamation of inactive bodies. Proto-Graveminds have also never been observed to keep any of their hosts' weapons. They use some of their hosts' legs as a means to support themselves, and one can see some of the bodies of the most recently assimilated, embedded in the Proto-Gravemind's mass, albeit deformed.

A large proto-Gravemind, maturing into a Gravemind.

Proto-Graveminds are capable of jamming or distorting radio signals within a significant radius around them. The means by which they do this is unknown; however, it may be related to the unexplained telepathy the Flood use to communicate with one another. In one instance, a Proto-Gravemind was shown to be capable of both jamming a real transponder signal and replicating it from its own position to draw in nearby human forces.[5]

The Proto-Gravemind must grow incredibly in size to reach its next stage of evolution, known as a Gravemind, a near-omniscient Flood form made of thousands of host bodies infused with the knowledge of each host that was used to make the Gravemind.[6] Graveminds are created once a Proto-Gravemind reaches a certain "critical mass" and develops a centralized intelligence. This happens only on extremely rare occasions, usually because the Flood is seldom loose on a large enough scale to allow Proto-Graveminds to grow large enough to become a Gravemind. Only two Graveminds are known to have ever been created; however, they seem to have the same memories, since the Gravemind present during the Human-Covenant War possessed detailed knowledge concerning the Forerunner-Flood war and even described the actions of the previous Gravemind during that time period as if they were its own. 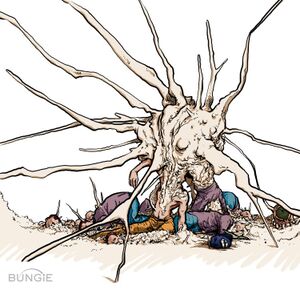 Early concept art of a proto-Gravemind.

Proto-Graveminds have been encountered several times, in varying stages of size and potency.

Another Proto-Gravemind was observed on the Covenant ship Infinite Succor at around the same time. This one appeared to be made up of Unggoy, Sangheili, human combat forms, and even animals from the ship's hunting preserve. The form was constructed in the ship's engine room, near the core, probably because the command center of the ship was not accessible to the Flood. This form was destroyed by Rtas 'Vadumee before it could pilot the Infinite Succor out of the system.[4]

Yet another Proto-Gravemind was present on the prison ship Mona Lisa shortly after the destruction of Installation 04. Flood on board the ship were attempting to access the ship's FTL drive by collecting and absorbing the knowledge of UNSC pilots into this Proto-Gravemind. It was destroyed when Ngoc Benti killed it with fragmentation grenades.[12]