The barracks in Halo Wars.

"The Barracks trains the bulk of the UNSC infantry units. Infantry technology upgrades can also be found here."
— In-game description

The UNSC Barracks is a military building produced off of a Firebase. It is the building where the UNSC recruits and stations infantry. The Covenant equivalent to the Barracks is the Hall, while the Banished equivalent is the Raid Camp.

This is no UNSC academy. The Barracks is a rustic shack compared to the comforts of a real training center, but then again a Marine in the field isn’t generally thinking about creature comforts. They make you soft. The Barracks simply houses the raw recruits and equipment needed to field squads of UNSC Marines. A quick briefing, visit to the armory, and you’ve got boots on the ground.[1] Infantry shipped down from the Spirit of Fire muster in the firebase's Barracks. The Barracks allows the requisition of Hellbringers, Cyclops, Snipers, Marines and ODSTs and unlocks their upgrade options. Army and Marine Corps troopers are detached ("chopped") from their parent unit aboard the Spirit of Fire and deployed to reinforce key firebases on the Ark's surface. replacing injured personnel who are then medevac‘d out of the combat zone. While they await assignment to a fireteam, the "new blood" acclimate and review tactical situation reports in the barracks, which doubles as a recreation area and mess hall during lulls in battle.[2] 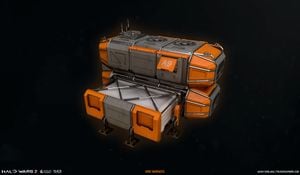 A render of the Barracks, as it appears in Halo Wars 2.