(Redirected from Gravity Lift)
This article is about the technology. For the Halo 3 equipment item, see Portable gravity lift. 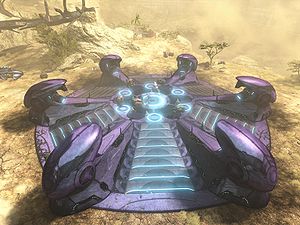 The gravity lift is a form of transport derived from Forerunner technology by the Covenant. A gravity lift can safely transport individuals or goods vertically without the need for a physical lift.[1]

During Operation: SILENT STORM in 2526, Blue Team used gravity lifts leading from the fabrication barns on the Ring of Mighty Abundance to send HAVOK tactical nuclear weapons aboard the Covenant supercarrier Hammer of Faith and destroy it.[2]

In April 2552, during the Battle of Fumirole, Spartan-III Catherine-B320 attempted to use the gravity lift of the Ket-pattern battlecruiser Sanctity of Purification to deliver a Fury tactical nuclear weapon aboard the ship and destroy it from within. However, Kat was injured by a shot from a Type-26 Banshee, causing Thom-A293 to take the warhead instead. With little time until detonation, Thom flew into the gravity lift using his Series 8 jetpack and threw the bomb into the hanger bay he landed in. However, while Thom was successful in destroying the battlecruiser with this maneuver, he was unable to escape the ship in time and perished in the explosion.[3]

During the Fall of Reach in August 2552, Frederic-104 and Kelly-087 used the gravity lift on a Covenant cruiser to send a Fury tactical nuclear weapon aboard the ship and destroy it along with the troops gathered underneath.[4]

In September 2552, during the Battle of Installation 04, Spartan-II John-117 and several ODSTs had to fight their way aboard the Ket-pattern battlecruiser Truth and Reconciliation using the gravity lift, which was heavily defended by Covenant forces.[1] Later, the Master Chief had to fight his way back aboard the battlecruiser using the gravity lift after overwhelming Flood forces caused the Master Chief to jump out of the ship.[5] When the human forces later took control of the battlecruiser, the gravity lift was one of two methods of entry used to gain access to the ship. It was then deactivated as the humans prepared to depart Installation 04 in the Truth and Reconciliation.[6]

Shortly after the departure of the Solemn Penance, ODST Taylor "Dutch" Miles helped other UNSC forces take the carrier's former landing zone, which still contained the deactivated bottom of the ship's gravity lift.[11]

In April 2559, as part of Isabel's plan to destroy the Banished CAS-class assault carrier Enduring Conviction, she had ground forces from the UNSC Spirit of Fire take over the carrier's gravity lift, while more ground forces used a particle cannon to take down the carrier's shield.[12] Spartan Jerome-092 worked to take the gravity lift with the help of Alice-130, hampered by Banished defenses sent down from the carrier using the lift. After positioning Kodiak tanks, the UNSC forces were able to take out the defenses around the gravity lift while Douglas-042 and Professor Ellen Anders took down the shields. Jerome and Isabel then boarded the ship through the gravity lift, and Isabel used the Enduring Conviction's energy projector to provoke the Ark's Sentinels into attacking the ship. The Sentinels severed the ship in two, knocking out power to the gravity lift, which ended up in the part of the ship Jerome was not in. With no other choice, Jerome was forced to jump from the ship to the surface of the Ark.[13]

In October 2559, after Atriox's arrival on Reach, Castor directed him down a nearby tunnel to an access shaft, sure that the humans would've retreated or soon would due to the threat of one of Cortana's Guardians arriving shortly. As a result, the storm from the slipspace portal would provide the perfect cover for War Chief Escharum's intrusion corvette to return and extract Atriox, Escharum and their forces from Reach's surface using its gravity lift.[14] The corvette extracted the Banished forces and departed just before the Guardian could arrive.[15]

John-117 and Fire Team Charlie board the gravity lift of the Truth and Reconciliation.

The Forerunners made extensive use of gravity-manipulating technology, including gravity lifts.[17] This technology was eventually discovered and reverse-engineered by the Covenant. The usage of gravity lifts is commonplace in many of the Covenant's structures and installations, including their former holy city High Charity; there, gravity lifts served as the primary form of vertical transport, often in the form of long tubes that ran inside the city's towers.

Gravity lifts can also be projected from the underside of most Covenant starships. They can be used to lift ground-based troops and equipment onto a ship, or to safely transport troops to a planetary surface. Covenant citadels employ gravity lifts to lift supplies to and from orbit, before they are stored in the base's warehouses.[18] They are also used as means of transport between the decks of ships. Some smaller craft, including Phantom dropships, some Spirit dropships, and Lich dropships, as well as deployable lookout towers are also equipped with gravity lift technology. Larger military emplacements such as spires possess gravity lifts for transport between the structure's various levels. Small, infantry-portable versions of the gravity lift are used by Covenant forces.

A variety of technologies employ gravity manipulation similar to gravity lifts; these include the man cannon, which propels individuals or objects in a tilted angle as opposed to a vertical span, or the gravity bridge, which consists of a horizontally-oriented gravity field.