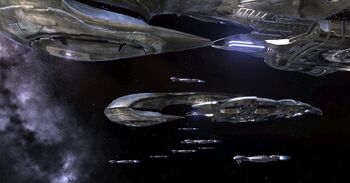 A pair of Covenant assault carriers with a number of battlecruisers.

Covenant carriers are a broad type of ship classification of the Covenant fleet and its remnants. Often grand and illustrious, they serve as hubs for administrative and religious activities within their assigned fleets.[1]

Carriers held a Covenant fleet's clerical authority for religious ceremonies, contained small assembly forges for repairs, and the bulk of the food supply. They were often used to clear operating areas of space fighters allowing other vessels in a fleet to focus on other targets.[1]

Assault carriers are the Covenant carrier type most commonly encountered by Covenant forces, classed as Examiners in the Covenant ship classification system. They are generally the ones tasked with leading fleets of smaller warships and acting as primary combatants in space warfare.[2] The Three-letter classification system developed by the United Nations Space Command designates most of these vessels as CAS-class assault carriers,[3][4][5][6][7][8] with the Office of Naval Intelligence considering the Class-5 flagship carrier.[9]

A number of design pattern variations of assault carrier exist:

There is also an unidentified model of light carrier. Measuring 1,455 meters (4,790 ft) in length, it boasts 13 launch bays that contain a total of 300 Seraph fighters, 200 Banshees, and 34 dropships, and is crewed by more than 4,000 Covenant troops. It is armed with multiple plasma torpedo silos and pulse laser turrets. As it is less common and more powerful than a Covenant cruiser, it is most likely designed to act as a command ship and provide fighter support during engagements.[7]

The largest warships in the Covenant armada were sometimes referred to as "supercarriers" to distinguish them from lighter carrier vessels that filled support roles.[11] They are extremely large warships bordering on overlap with harborages such as Unyielding Hierophant, or the Exarch class of vessels in Covenant service. In UNSC three-letter classification, the Sh'wada-pattern supercarrier is dubbed the CSO-class supercarrier, and is considered a Class-5 flagship carrier similarly to the smaller assault carriers.[9]

Alongside the Sh'wada-pattern, an unidentified model of supercarrier even larger in scope also exists in service with the Covenant fleet, rarely documented by the UNSC. Like other models of supercarrier they are often used as flagships for Covenant fleets, and may be used by Prophets as their personal command ships. One example, Sublime Transcendence, led the Combined Fleet of Righteous Purpose, while another commanded the Second Fleet of Homogeneous Clarity.[1]

Covenant forces have long made use of various carrier classes within their fleets.[Note 1]

For a number of years leading up to the Human-Covenant War, several Covenant carriers were served as support ships and some along with "supercarriers" were assigned in the Second Fleet of Homogeneous Clarity of the defense fleet of High Charity.[12] By April 15, 2526, a Covenant supercarrier Hammer of Faith was under construction at the Ring of Mighty Abundance and above Zhoist, a Covenant-controlled world, and remained incomplete, it was destroyed by two HAVOK tactical nuclear weapons by John-117 and Kelly-087 during the Attack on Zhoist, along with its surrounding fabrication barns.[13] On July 17, 2552, a carrier, escorted by a pair of Covenant frigates and a destroyer, attempted to seize control of the human colony world Sigma Octanus IV. When the destroyer and the two frigates were destroyed by Captain Jacob Keyes, the carrier retreated until reinforcements arrived. However, the carrier did succeed in deploying 34 dropships to the surface of the planet to initiate an invasion while hailing the rest of the Covenant fleet.[14]

During the Battle of Installation 05 and the Great Schism, the light carrier Lawgiver assisted Incorruptible during the battle against the Jiralhanae and the Flood.[15] A carrier would also go on assist Covenant forces in the Onyx Conflict later that month.[16]

By October 2559, a former Covenant supercarrier was used as part of the Banished occupation fleet on Reach under War Chief Escharum's command, presumably used as a flagship for the formidable armada. It also carried the War Chief's personal intrusion corvette.[17]