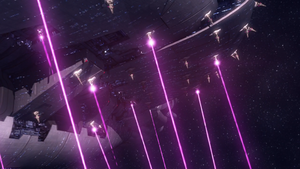 Pulse laser turrets are a light spacecraft-mounted directed-energy weapon system. They have historically been predominantly employed by the Covenant and its remnants, though in more recent years have seen adoption among the starships of the UNSC Navy.

Pulse lasers are typically used in point-defence roles against strikecraft and inbound projectile weapons such as missiles, though can be used in a limited anti-ship role when needed.[1]

The pulse laser turret is one of the Covenant's primary weapon systems, often classified as a point-defense weapon comparable to human projectile point-defense guns. They are generally mounted aboard spacecraft of all sizes, ranging from smaller R'shwupa-pattern Phantom gunships to the largest cruisers and carriers.

Covenant pulse lasers are typically considered superior to the projectile equivalents employed by humanity, due to the Covenant's superior power storage systems and gravitic-lensing focal arrays.[2]

Pulse laser turrets operate using lasers as their preferred method of operation. The weapon type used on the missionary ship Minor Transgression consisted of a hydrogen fluoride-based chemical laser, though it is possible other pulse lasers on larger starships operate via other means.[3] This specific example had a power output of five kilowatts of infrared light.[4]

The operation of the pulse laser turret can vary from model to model; some such as the Pol Naran-pattern operate as beam lasers, while others such as the R'aka-pattern consist of a rapid-firing pulse laser. However, most pulse lasers generally have a fairly low rate-of-fire.[1] Before the weapon fires, it must first charge; during the charge, a sphere of light energy forms around the charging weapon. After finishing charging, the weapon expels a cyan/purple beam of energy.[5]

If equipped with energy shielding, a given warship must disable a section of the ship's shielding to allow the pulse weapons to fire completely.[5]

Damage dealt by the pulse laser turrets are known to be serious threats to most, if not all UNSC ships; a pulse laser salvo is capable of melting through Paris-class heavy frigate UNSC Commonwealth's 60 centimetres (24 in) of Titanium-A armor hull in a single shot.[6] In this instance, the UNSC Commonwealth received severe damage in sections three and four, armor down to twenty-five percent and hull breach in section three .[6]

Alongside the above vessels, pulse laser turrets are employed on Kig-Yar ships such as the missionary ship Minor Transgression and aboard Jiralhanae warships, such as the dreadnoughts and Tronto boarding craft used by the Banished.

Toward the later years of the Human-Covenant War, humanity was able to develop a number of energy weapon systems based on technological advances resultant of reverse-engineered alien technology. As such, the United Nations Space Command have begun to employ pulse lasers on a small handful of their craft. These include the Magna-320 pulse laser, used as a primary armament on the Anlace-class light frigate and several small pulse laser turrets employed on the G81 Condor gunship.