This article is about the Shade model in Halo Wars 2. For the Banished Shade variant in Halo Infinite, see Bolroci Workshop Shade.

This Shade design is a custom variant in the Shade line of deployment turrets, prominently used by the Banished.

The Shade variant employed by Yapyap's forces bears a considerable visual similarity to the So'riru-pattern Shade and Mamua'uda-pattern turrets employed by the Covenant. It features an extensive layer of armor plating and a more enclosed cockpit to protect the operator.[1]

The Banished operated these Shade designs during the Second Ark Conflict in 2559. They were used by Yapyap's rebellion, and crewed with Unggoy gunners.[1] 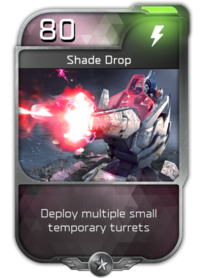 Shade turrets appear in Halo Wars 2 as a leader power that can be employed by Yapyap.

80 to deploy, and is of Uncommon rarity.