Were you looking for plasma mortar? 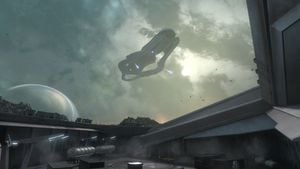 "Corvette over the starport pounded the hell out of the place."
— Sergeant Marcus Stacker, after a corvette bombarded the New Alexandria Starport[1]

The plasma bombardment mortar is a ship-to-surface plasma weapon system employed by the Covenant.[2] Bombardment mortars are a powerful orbital bombardment system capable of launching an indiscriminate and unrelenting barrage of plasma mortar shells down on an enemy territory and surface targets[3], such as infrastructure and infantry.[4] Within the Covenant fleet, the mortar gunners aboard destroyers were trained to obey their orders without question or mercy, even if those orders resulted in the incidental loss of faithful Covenant warriors in the target area.[2] The Covenant maintained several plasma mortar design patterns.