An Unggoy Minor manning a Eeo'Pimu-pattern Shade on Installation 05.

Shade is a common name given to the Covenant's manned stationary gun turrets.[1][2] These weapons platforms vary in shape and role, but are similar enough in function and purpose to be grouped into the same category. Specifically designated types of Shade include the Type-26, Type-27, Type-29,[2] and Type-55 Anti-Infantry Stationary Guns.[3]

Shade turrets were once exclusively designed and manufactured by the Assembly Forges of High Charity. After the holy city fell to the Flood and was later destroyed by John-117, Achoem Weapons—based in Tolvuus, Sanghelios—maintains the long-standing tradition of manufacturing the Shade turret.[3] 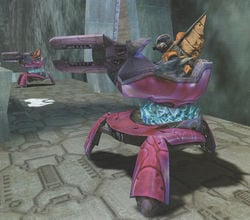 A pair of Mamua'uda-pattern Shades operated by Unggoy on Installation 04.

The Shades serve as the Covenant's primary stationary gun turrets and are commonly operated by Unggoy. Virtually all models of the Shade offer a wide field of fire by virtue of their mobile turret chassis nestled on a 360-degree traversal anti-gravity mount. The Covenant use this to their advantage and place Shades at strategic points where they can do the most damage, often around their outposts or bases; more permanent facilities are usually also equipped with heavier Kewu Umppi'pa'-pattern citadel turrets. Though most of the Shade models fill an anti-infantry role, anti-vehicle and anti-air variants of the Shade turrets also exist.

Anti-infantry Shade guns fire bolts of slow moving, high-powered plasma encased in magnetic fields. The accuracy of a Shade's weapon is fairly low, as the bolts of plasma fired can hit anywhere within the aiming reticle. The anti-infantry Shade is effective against most infantry. However, due to their high intelligence, Sangheili will often find cover and escape the Shade's range of fire. On this same note, the bolts fired lack the required punch to damage Mgalekgolo, whose armor and combat shield can withstand most Covenant and UNSC small firearms, causing the plasma bolts to have little to no effect on them. It has shown good defense against light vehicles such as the Ghost, and in desperate situations, can serve as anti-aircraft defense, requiring only a few direct hits to destroy a Banshee.

As with its recognizable human counterpart, the M41 Light Anti-Aircraft Gun, the anti-infantry Shade is very effective against both enemy ground forces and light vehicles. Some of its advantages over its human counterpart are that the plasma bolts are accurate and effective at longer distances and it is easier to see where shots are actually going than it is with the M41's rounds, although this might also affect the ability of the target to dodge them. As a disadvantage, the operator will be exposed to enemy fire. While it is useful against enemies in light vehicles, this is not a weapon of choice when facing an enemy armored vehicle. Also, as is the case with the M41, the gunner is unprotected from the rear and particularly vulnerable to grenades.

The T-25 Shade is a rare iteration of the turret. According to ONI analysis, the Dextro Xur-pattern Spirit's plasma cannon appears to be a slightly older variation of the weapon installed on the T-25 Shade turret.[4]

The Preksheda-pattern Shade is the most widely used version of the Shade turret, and is generally regarded as the most effective one. This is in no small part due to its versatility; the components of the Preksheda-pattern Shade are interchangeable, allowing for different weapon configurations to suit a variety of roles, including anti-armor fuel rods or more powerful plasma bolts and additional energy shielding for anti-air defense.

The Preksheda variant is made up of a main turret component, which rests on a circular anti-gravity cradle which allows for 360° movement. Though several different configurations of the gun have appeared, the chassis of the basic version offers little protection for the gunner other than two flaps of armor on the side flanks.[5] A heavier armored version of the weapon also exists; this variant provides excellent front and side protection for the gunner.

The Rizsheda-pattern Shade was used by the Prophet of Truth's forces in the final month of the Human-Covenant War until his death at the hands of the Arbiter Thel 'Vadam.[6] The Rizsheda variant is equipped witb a 360° platform similar to the Preksheda variant and more protection to the the gunner.

The Eeo-pimu-pattern Shade is one of the rarer variants of the Shade turret. Like the other variants, it is made up of a turret component resting on an anti-gravity mount. The Eeo'pimu variant is equipped with a frontal energy shield to protect the gunner. It is lighter in design than the other variants and thus far more portable.[2] It fires red plasma bolts similar to the heavy plasma cannon of the Ru'swum-pattern Phantom.[7]

The Eeo'pimu-pattern Shade saw use by the Prophet of Regret's occupation forces deployed from Solemn Penance to New Mombasa and Installation 05 in 2552.[7]

The Mamua'uda-pattern Shade consists of a sturdy base of three legs and a floating, mobile, turret-like seat with control systems for its plasma cannon. It fires three rounds of slow, purple plasma bolts at once, and has very limited precision and a medium rate of fire. It provides greater mobility than some of the other variants, at the expense of protection.[2]

The Sho'riru-pattern Shade is a more recently-encountered model, notably deployed by Jul 'Mdama's Covenant during the first and second battles of Requiem in 2557 and 2558, respectively.[8]

The Bmur'resh-pattern Shade was utilised by both the Swords of Sanghelios and Jul 'Mdama's Covenant during the Battle of Kamchatka, Battle of Nuusra and the Battle of Sunaion in 2558.[9]

During the occupation of Installation 00 in 2559, Yapyap used an unidentified variant of the Banished Shade turret during his rebellion against the Banished.[10]

During the Battle for Zeta Halo, Escharum's forces used a variant similar to the Preksheda variant with energy shielding in place of armor plating used in the Rizsheda variant.[11]

The Shade was first seen in the E3 demo atop a Wuzum-pattern Spectre and made its first gameplay appearance in Halo: Combat Evolved's level, The Truth and Reconciliation. The campaign version of the gun is almost twice as fast as the multiplayer version.

In Halo 3, the Shade's aiming reticule was similar to a Needler's, except with a circle of lines at the center. The Shade was in multiplayer only in Halo 3 Epsilon, as it was removed from the final version, even in Forge. Shades were later made available, free of modding, on some Forge maps.

Neither the Power Drain nor an overcharged Plasma Pistol shot can disable the Shade's firing mechanisms, though either of these will temporarily disable its ability to rotate, this applies to all EMP weapons.

The Shade makes an appearance in Halo Wars and is identical to the Type-29 Shade from Halo: Combat Evolved. Anti-air and anti-vehicle variants of the Type-26 Shade are also introduced in Halo: Reach.