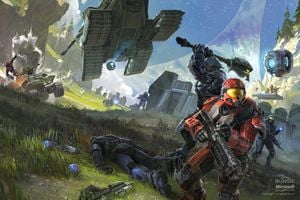 Concept art of a Forge game in progress.

Forge returned as a multiplayer gamemode in Halo: Reach, branded as Forge 2.0. The mode was shown off in the Forge World ViDoc as a vast improvement over the mode featured in Halo 3. The mode can also be accessed via the multiplayer component of Halo: Combat Evolved Anniversary, though only maps playable in the Anniversary Map Pack are playable on this disc.

The main menu for Forge in Halo: Reach.

Object manipulation in Forge 2.0 has been vastly improved.

Though Forge 2.0 is vastly improved over Classic Forge, there are still a few restrictions on what a player may do to edit a map.

Following the tradition set by the maps Sandbox and Foundry in Halo 3, Halo: Reach now introduces its own dedicated Forge canvas, Forge World. Unlike any map developed before it, Forge World exists as a map purely dedicated to Forging as a blank canvas. However, upon launch, Forge World was the only map which supported the vast majority of Forge objects and features, with many maps not allowing for most structure or scenery objects to be placed down. The release of the map Tempest in the Noble Map Pack introduced another map to the selection that allowed for Forging and the later release of the seven Anniversary Map Pack maps additionally allowed for more Forge canvases, with Forge variants of each of the seven maps existing to serve as a more accurate replica of the original experience.

For the development of Forge World, developers were inspired by the idea to combine several pre-existing maps into one large map so that players may fly from a Blood Gulch-esque canyon to a rock pillar akin to that of Ascension, with many other locations such as cliffs, islands and interior areas additionally accessible. To assist with this, Reach shipped with several developer-made Forge maps on the disc;

Although none were officially designated as Forge Canvases, the following maps all featured a large amount of features and items available to use in Forge mode unlike the majority of multiplayer maps in the game.

Glitch 1: Occasionally and seemingly randomly, one or more of a player's custom maps will fail to save, even when the in-game message "Save Succeeded" pops up after saving a map. Because of this, when the player selects a new map to forge on, the previous map will be, in essence, deleted.

Glitch 2: Occasionally and seemingly randomly, any number of a player's custom maps will be put under another custom map's name, and the original title(s) of the moved map(s) will house a different map(s) (not necessarily a map title that the original map/maps is/are now under). This "shuffling" of maps may result in one or more maps disappearing.

To avoid being a victim of the Forge Save Glitches, it is advisable for players to:

Following the release of Halo: Reach to Halo: The Master Chief Collection a new content update to Halo: Reach's forge be will be added. Referred to as "Thorage", it will be changing forge functionality and the palette from the original version of forge. Some budget restrictions will be changed, allowing more objects to be placed. These changes will be available on the two "official" forge maps - Forge World and Tempest. It will also be adding in new objects to Halo: Reach Forge mode.[1] Specifically the ones listed below.

A video of the Thorage objects on Tempest can be found here.