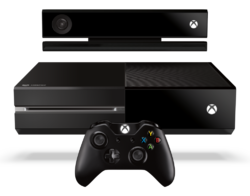 The ambiguous Halo on the Xbox One.

The Xbox One was first revealed to the public during Microsoft's keynote conference at E3 on May 21, 2013. During development, the Xbox One was codenamed Project Durango. The Xbox One was released on November 22, 2013 in 13 initial markets, with the rest of the world to follow in 2014.[4] It is a direct competitor with Sony's PlayStation 4 and Nintendo's Wii U as part of the eighth generation of video game consoles, retailing at $499 USD (£429 GBP).

Microsoft calls the device an "all-in-one entertainment system," placing an increased emphasis on entertainment using an updated Kinect peripheral and offering the ability to use an existing set-top box to watch live TV (using the new Kinect as a voice controller), a built-in Skype application, and improved support for dual screens. The console also provides new in-game functionality, such as an expanded Xbox Live service, improved Kinect functionality, cloud computing, the ability to automatically record and share video highlights from gameplay, and integrated support for live streaming gameplay online.

Initial reaction to the Xbox One was mostly negative. Early reviews praised the console's new features, while others had criticized its lack of backwards compatibility with Xbox 360 games, online connectivity requirements, mandatory integration with Kinect, and ambiguous restrictions on the resale and sharing of used games. In response to consumer feedback, Microsoft announced that the originally planned digital rights management and internet connection requirements would no longer be attached to the Xbox One.

In June 2014, it was announced that the Xbox One would start shipping without the Kinect sensor in a new package retailing for $399 USD (£349 GBP). A new software development kit (SDK) was also announced, freeing up the processing power previously reserved for the Kinect sensor.[5]

As with the Xbox and Xbox 360 before it, a limited edition Halo 5: Guardians Xbox One console bundle was made available for sale for US$499 at release.

The bundle features a 1TB custom console and controller inspired by Jameson Locke's armor. Like the Halo 4 limited edition Xbox 360, the console features unique sound effects which play when turning on, turning off, and ejecting a disc. Unlike previous limited edition consoles which included only basic versions of their respective games, the Halo 5: Guardians console includes all the contents of the Halo 5: Guardians Limited Edition. Also included is the unique FOTUS-class Mjolnir armor and multiplayer emblem. The Spartan Locke controller is also available for individual purchase which also includes the Resolute visor REQ pack (something conspicuously absent from the console bundle). An additional Master Chief-inspired controller is also available, which includes the Dauntless visor REQ pack.

For the first time, the limited edition console and controllers were released one week prior to the game itself (October 20, 2015) thus allowing players to set up their consoles and download Halo 5: Guardians in time to play the game as soon as it launched on October 27, 2015.

The Xbox One X, codenamed Project Scorpio, is a model of Xbox One released in 2017 which featured significantly more powerful hardware than any of the other models. It was designed to target 4K resolutions, in comparison to the 1080p "Full HD" resolution targetted by the other Xbox One consoles. All Xbox One games are supported on the Xbox One X, with many receiving patches to increase resolution, framerate or graphical quality on the Xbox One X specifically, when compared with other Xbox One models. Those that did not receive a patch instead benefitted from increased performance as a result of the One X's more capable hardware, but were otherwise identical.