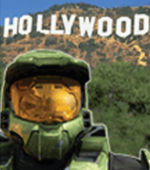 The image released alongside Bungie's announcement of the Halo film in 2004.

"If we ever make a Halo movie, who would you want to write it?" I asked Marty as we exited the theater, "I bet that Garland guy would be all over the Flood."
— Joseph Staten, after watching 28 Days Later.[1]

The Halo film, officially confirmed in 2005,[2] was a film project in development until its ultimate cancellation in 2006.[3] The film, intended to be produced by Peter Jackson and Fran Walsh and directed by Neill Blomkamp was postponed indefinitely when funding studios 20th Century Fox and Universal Pictures pulled out due to monetary concerns.[4] 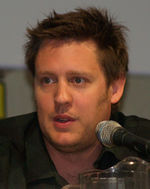 The Halo film was to be filmed in live action with special effects, along with props and costumes, created by WETA Workshop and WETA Digital. WingNut Films, a New Zealand-based production company known for collaborating with Jackson on The Lord of the Rings trilogy, were also to be a part of the project.

It was later revealed that the film would have been shot in Wellington, New Zealand, and was slated for a summer 2007 release.[2]

Halo: Landfall, a promotional series for Halo 3, was composed of test shorts filmed by Blomkamp during the Halo film's early production.[5]

When plans for the film eventually fell through, Jackson and Blomkamp instead started production on District 9. Many elements from the cancelled Halo film were re-used or adapted for District 9, including the basic Warthog and Pod infector designs.

In the DVD commentary for Hellboy 2, Guillermo del Toro states that he did a design of Master Chief for the Halo movie. He describes Master Chief's helmet as being "sleek and self concealed".