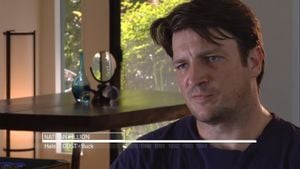 "I'm a Halo guy. The Bungie folks were kind enough to have me do a voice for Halo 3. So there's nothing like sitting down to a nice game of Halo and shooting at myself. I like to get online, and the reason I like it is I've got a lot of friends in Canada and New York, all over Los Angeles and at great distances. Sometimes I take off for months at a time to go work, and my social time is on that box. You put on a little headset and unwind with your friends. You hang out, you laugh, it's good times. And when it's all done, you don't have to send anybody home. No one's drunk all your beer. You just say, "good night, I'm going to bed", and it's off and it's done."
— Nathan Fillion on Halo[1]

Nathan Fillion (born March 27, 1971) is a Canadian actor, best known for his lead role in the television series Firefly as Captain Malcolm Reynolds.

In Halo 3, he supplies the voice of Gunnery Sergeant Reynolds, named in homage to Fillion's most famous character. Not only does Nathan Fillion provide the voice for Gunnery Sergeant Edward Buck in Halo 3: ODST, but the character's physical appearance was modeled after the actor as well. Fillion has also confirmed his work as a voice actor in Halo: Reach reprising his role as Buck for a cameo in the level New Alexandria,[2][3][4] and also providing the character's Firefight voice. Fillion once again reprised his role as Buck in Halo 5: Guardians.[5]

Fillion also provided the voice for a SPARTAN-IV in the Multiplayer Beta trailer for Halo 5: Guardians.[6]