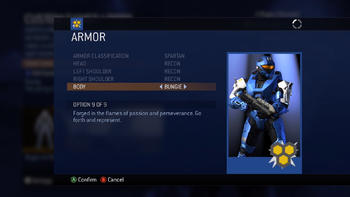 The Bungie Armor at the Appearance screen.

The Bungie Armor (also known as the Flaming Head or Legacy in Halo: The Master Chief Collection) is an armor permutation in Halo 3 only available to Bungie Studios employees (and Bungie members on 7/7/10).[2]

The Bungie Armor is visually identical to the EOD armor's chest piece, save for its fire effect and the absence of the EOD Armor's lights near the shoulders and center. However, it is unique in providing a fire visual effect to the player's head, which can be seen even if the player is equipped with active camouflage. Due to the permutation being classed as a chest plate, this means the flames can be employed with any combination of helmet or shoulders. The armor is a possible reference to Bungie's love of flaming ninjas, a recurring joke throughout the studio.

The Bungie Armor armor permutation is a special unlock in Halo 3. As its name suggests, the Bungie Armor was created as an exclusive unlock for members of the Bungie Studios development team. As such, there is no way to use it in Halo 3 without the use of modding or being a developer. Only two exceptions to this policy are known to exist, one being Nathan Fillion (voice actor for Reynolds in Halo 3 and Edward Buck in Halo 3: ODST, Halo: Reach and Halo 5: Guardians) and the other being Pope rex, the winner of the Sarkathlon 4 event. When Frank O'Connor left the studio to work for 343 Industries, Bungie stated in response to questions about O'Connor's flaming head that "The flame has been extinguished."[3]

Due to this exclusivity, the armor was often used in site banners on Bungie.net as a perk of joining the Bungie team, with the phrases "Get hired, get fire" and "Game with Flame". Notably, the armor was available for use by the Halo 3 community for one day on Bungie Day 2010. During this event, all players also had the Bungie nameplate applied, as the two were linked. Due to the armor's exclusivity, it bears some resemblance to the similarly-elusive Recon armor, which until the launch of Halo 3: ODST was only unlocked via personal selection from Bungie.

The Bungie Armor's legacy extended into Halo: Reach thanks to the addition of the new armor effects category of customisation. At launch, the orange flames were available to anyone who purchased the Halo: Reach Legendary Edition, while Bungie reserved a similar effect - named Eternal - for themselves. Unlike the Legendary effect's orange flames, Eternal's are blue.[4][5] The Headhunter gametype similarly references the Bungie Armor, with its emphasis on flaming skulls.

In the initial launch of Halo: The Master Chief Collection, the armor was known by the name Flaming Head and was only useable as the Bungie Armor chest piece, with the helmet and shoulders being Mark VI. As The Master Chief Collection provides all players all unlocks immediately, this marks the first time the Bungie Armor has been useable for non-Bungie employees (outside of Bungie Day 2010) without the use of modding.

In the updated Halo 3 customisation available following the game's launch on PC, the specific Bungie chestplate is called Legacy. During the game's Flight testing, the armor retained the original name of Bungie.