This article is about the Halo 3 multiplayer map. For the AI group, see the Assembly.

Assembly is a Halo 3 multiplayer map which is part of the Mythic Map Pack, which additionally includes Orbital, and Sandbox. It was originally planned to be in the Legendary Map Pack under the name Purple Reign, but was cut out due to the fear that it wouldn't be finished on time. This map, along with Sandbox and Orbital was released February 26- March 3, 2009, depending on world region, with Halo Wars Limited Edition and was released to the Xbox Live Marketplace on April 9, 2009.

Assembly is set within the Assembly Forges, a Covenant manufacturing plant on High Charity.[1] The map in particular is set inside a Deutoros-pattern Scarab manufacturing plant, in the midst of a gargantuan "lake" of Lekgolo worms. Above the map, a massive energy conveyor belt can be seen, with the level itself an "island" in the lake featuring machinery designed to decontaminate the Scarab shells in preparation for the city-sized Lekgolo colonies that will breathe life into the massive metal husks.[2] The Scarabs appear as just torsos, without inner workings, legs, or armaments. The husks still appear energized. 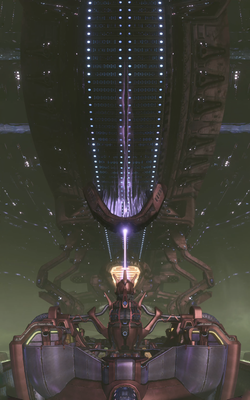 A vertical panorama of the map, showing the assembly line.

The husks come out of a large orange hole of some kind on one end of the map, with the movement of machinery and releasing of steam. The device halts above the facility the players play upon, which has a large energy beam that leads up to a large ring around the husk. The beam then decontaminates the husk so Lekgolo worms can be inserted later on. The device gives off a large electric field and the husk shakes wildly. The husks then continue along their way in the same manner as they came into vision, exiting through a blue hole, once again with the movement of machinery and releases of steam.

Assembly is located on an "island" of machinery in a sea of glowing green coolant. Overhead, legless Scarabs can be seen moving via an automated gravity beam. Assembly appears to be a structural support for the gravity beam. The facility is located within the Assembly Forges, a facility located aboard High Charity (prior to its destruction).

The map itself is bowl shaped, sloping toward the center. This bottom floor is dotted with pillars and walls for cover. It has an outer rim with four bridges, that connect to the two-story center structure, and has small structures on the rim intended as high ground. The bases are symmetrical, but the level actually has two distinct sides, with a lift on one side and what is referred to as the "dugout" on the other, making side differentiation better. Line of sight is generally open, with mid-range combat being optimal when on the second level. However, within the center structure and around the pillars that dot the bottom level, close combat is possible.

The map is focused on competitive playing, as it is a multi-story arena-style map. It features two "somewhat enclosed" bases, with one-way mirrors on the second floor (like those in interrogation rooms), where players are able to look out, but players outside are unable to see in.[3]

The crest of the hidden Skull on this map appears to be what looks like that of the Lekgolo worms, referring to the Scarab assembly line in the distance.

Assembly was being worked on as early as January 2008.[3][4] The map was later talked about extensively as intended to be part of the Legendary Map Pack alongside "Cottonball" and "OK Corrall", given the working name "Purple Reign" - a reference to the Prince song of the same name.[3] Following its removal from the Legendary Map Pack, the map would later have more details revealed alongside "Moonbase Alpha" and "Smuggler", in which it was stated the map would reveal more about the "Scarab-Hunter mystery".[5] A digital sketch would later be released in July 2008.[6]

Adding to this mystery, Luke Smith posted on a thread on the Bungie forums that "the name Assembly is extremely appropriate."[7] It would be found that this comment, came after the release of the name of the map in the Weekly Update on the same day alongside screenshots.[8] His comment would refer the fact that Scarabs are assembled within the facility. The Scarabs are carried along an assembly line, with the playable area of the map being one of the machines that constructs the Scarabs.