This article is about the campaign level. For the location, see Tsavo highway (location).

Tsavo Highway[2] is the fourth campaign mission of Halo 3.

After successfully evacuating the upper area of the Crow's Nest base, SPARTAN-117 finds himself in an underground garage containing multiple Warthogs and leads a group of Marines out of an underground tunnel. He then leads the surviving marines towards the town of Voi. A Pelican drops a pair of Troop warthogs and one regular M12 (with M41 LAAG). After fighting his way down the highway, through many Covenant troops, SPARTAN-117 breaches the barrier blocking the path leading to Voi and the ancient Forerunner artifact, buried beneath the Earth's surface.

Warning: Hitchhikers may have Jet Packs.

The Master Chief starts to wake up.

Note that sometimes Stacker will appear in the place of Reynolds but will still say the dialogue.

The Master Chief comes to in the wreckage of the elevator, with wounded Marines being treated and other Marines trying to regroup. The elevator shaft above is engulfed in flames.

A squad of Marines are standing directly outside the elevator.

On the other side of the underground vehicle maintenance bay, a Marine Sergeant shows up at the other side of the elevator wreckage and begins to handle the situation. He runs up to the gate, coughs loudly, and fires a battle rifle burst at a security camera to perhaps prevent any remaining Covenant forces from finding the squad of Marines.

The Marine heads to the generator room and activates the emergency power.

The Master Chief and any Marines fit for duty form up on the other side of the maintenance bay, with an M12 Chaingun Warthog and an M831 Troop Transport Warthog (or two M12 Warthog LRVs on co-op) parked and functional. The Marine Corpsman remains with the wounded Marines. The lights above the two Warthog turn on.

If the Master Chief jumps in either Warthog:

The Marines get in the Warthogs.

The Marine opens the door (or the Chief can too), and the Warthogs proceed down the tunnel.

At the gate leading out of the caves, two Marines from Second Squad are pinned down at a checkpoint by a small group of Kig-Yar and Unggoy. The Warthogs take out the Covenant forces, and head out. Another group of Kig-Yar spot the Warthogs and retreat into the hill away from the base entrance.

After taking out the fleeing lance they observe the massive wreckage from the New Mombasa Orbital Elevator, along with a crashed Phantom. 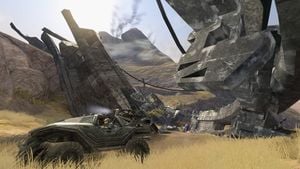 A Warthog amidst the wreckage of the destroyed tether.

If the Chief approaches the cliff and sees a long line of the elevator's wreckage.

The Warthogs continue on.

The Warthogs reach another crashed Phantom and kill the Covenant troops around it.

The Warthogs keep pressing on, reaching a Covenant-held dam. A Phantom hovers overhead while many Covenant troops (including Shade turrets and Kig-Yar Snipers on higher difficulties) fire on the UNSC force. The Phantom leaves and it doesn't take long before the Warthogs overpower the Covenant at the dam.

The Chief navigates around the dam. 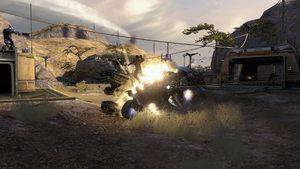 A Chopper rams into a Warthog from Stacker's convoy, killing the Marines onboard.

The Warthogs arrive at the Highway, encountering Jiralhanae Choppers and hostile infantry. One Chopper rams and destroys a fully manned attacking Warthog. Another Chopper soon follows. On higher difficulties, a Jiralhanae War Chieftain armed with a fuel rod gun leads the Covenant troops.

If the player dismounts the vehicle and goes into the small checkpoint where Stacker is located:

Note: If Stacker was the Sergeant the player started the level with, Reynolds will be present instead but may or may not say the above dialogue.

After a pitched battle involving many Unggoy, Jiralhanae and Shade turrets, the UNSC force are victorious. The Warthogs journey forward toward the tunnels, but are blocked off by an Anti-Vehicle Barrier. A swarm of Yanme'e fly out of the tunnel, but they are easily cut down by the Warthogs.

If the Chief waits for a while at the barrier:

The Chief walks through the shield, and destroys its power source.

The Warthogs continue along the Tsavo Highway through the tunnel. When they get out and reach a bridge, a Ket-pattern battlecruiser soars ahead.

The Warthogs reach a gap in the bridge and cannot continue. The Master Chief clambers across broken beams and bars and continues on foot. The Marines follow. A massive Forerunner artifact lies under the middle of the crater, and the Forerunner Dreadnought sits in the middle of it. Covenant ships are circling the crater. Banshees fly past the highway, but pay no attention to the UNSC forces. 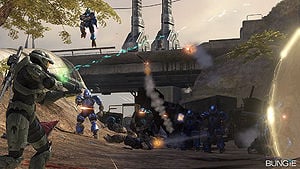 A pair of Marines are under attack by a Jiralhanae and his Unggoy subordinates near a pile of crates. The Chief rescues them and they join him to assault a large group of Covenant that are attacking an outpost at the top of a rise. The Chief and the Marines eventually clear the sector.

A Phantom approaches with reinforcements.

If the Chief heads off on foot before the Pelicans arrive:

The Phantom disgorges a large pack of Jiralhanae. The pack is soon wiped out by the Master Chief and his allies. A second Phantom swoops in and deploys additional enemy troops, including a Jiralhanae War Chieftain wielding a fuel rod gun.

After the enemy infantry are defeated, a Wraith appears.

The Chief neutralizes the Wraith.

Pelicans arrive and drops off Warthogs, along with some additional Marines. The Master Chief has a choice of taking one of the Warthogs the Pelicans drop off, or the Wraith that previously attacked if not destroyed. The tunnel onward on the Tsavo Highway is closed off, so the Chief goes up the trail where the Wraith came from, and finds a short tunnel leading back to Tsavo Highway. The entrance is guarded by several Jiralhanae Choppers, deployable lookout towers, and a pair of Shade turrets (on higher difficulties). The Chief and the Marines clear out the blockade and head through the tunnel.

The Chief exits the tunnel and comes across a pair of parked Choppers. He eliminates the dismounted drivers before they can get to their vehicles. Two Marines emerge from hiding and greet the Chief. 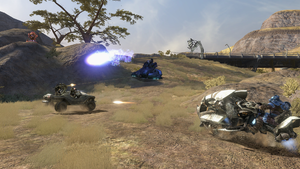 John-117 and his Warthog push through the Covenant blockade at the highway.

Nearly a dozen more Choppers, a few Wraiths and Shade Turrets defend the route back onto the highway. The Chief pushes on, supported by a steady supply of Warthogs. Despite being greatly outnumbered and outgunned, the Chief and the Marines eventually clear the zone.

If the Chief approaches the cliffside overlooking the massive storm over the vast crater beyond the cliff and there are Marines accompanying the Chief:

If there are no Marines are accompanying the Chief:

The Chief continues along the Highway. A large pack of Brutes bar his way.

A large number of Jiralhanae wait behind Covenant roadblocks in anticipation of the approaching UNSC force.

The Master Chief and any remaining Marines are forced to abandon their vehicles. They press forward, encountering heavy resistance from the Jiralhanae. Upon entering the next section the team comes under attack from a Shade turret as well as several Jiralhanae Jumpers. Wiping this force of Covenant out, the Chief attacks the last group of Jiralhanae led by a War Chieftain. He eventually clears the area. The only thing left standing between the UNSC and Voi is another Anti-Vehicle Barrier in the tunnel.

If the Chief waits for a while at the barrier:

The Chief destroys the power source with ease.

John-117 observes an assault carrier near the Portal.

The Master Chief (and the Arbiter on co-op) leave the tunnel entrance. Two Pelicans, one of which is Kilo 23, arrives to drop off an M12 Warthog LRV and Marines. Commander Keyes, piloting Kilo 023, has Lord Hood on one of the video screens inside the cockpit. The Chief heads towards the cliffside.

Chief observes a CAS-class assault carrier from the cliff.

The Pelicans fly off. The Master Chief draws his MA5C and walks to one of the Warthogs to retake Voi from the Covenant.