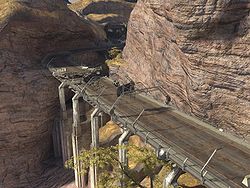 The Tsavo Highway, damaged during the Battle of Earth.

Tsavo Highway[1] is a highway that replaced the old Kenyan international trunk road A23. This highway bears the name "Tsavo" because it bisects the southern part of the Tsavo West national park, it does not actually pass through the town of Tsavo as is commonly mistaken.[2]

Roads are the primary communication links to all sectors of the economy and the population. It is widely recognized that an efficient road infrastructure is a prerequisite for economic and social development. In the twenty-first century, roads are referred to by a wide range of names and descriptions - National, Main, trunk, district, city, rural, local, access etc. However, roads can be broadly categorized according to the Authority primarily responsible for their management as national, district, urban and special purpose roads. National Roads are the main highways of the classified road network comprising Class A, B, C roads and are managed by the Roads Department of the Ministry of Roads and Public Works. These roads provide mobility in a national context and the traffic on these roads is usually associated with longer travel distances. Hence design provisions for these roads allow for relatively higher speeds and minimal interference with through traffic i.e. restricted access. Class A are international trunk roads linking international boundaries or terminating at international ports e.g. Malaba-Nairobi-Mombasa Road.

21st century map showing A23 (Tsavo highway) and the locations of Arusha, Voi, Tsavo, and Mombasa

In 1998, Kenya and its Partner States agreed on the East African Road Network Project. The project consists of five major regional road corridors, two are briefly described below. The Mombasa - Malaba - Katuna corridor and its feeder links consisting of the Mombasa - Lunga Lunga - Tanga, the Voi - Mwatate - Taveta - Holili - Himo, and three other links. The Dar es Salaam - Dodoma - Isaka - Mutukula - Masaka corridor with the feeder links being the Chalinze - Segera - Himo - Moshi - Arusha, the Dar es Salaam - Mtwara - Mbamba Bay and Nzega - Tabora - Mbeya, and one other link.[3]

The A23 resides in the western edge of the Coastal province of Kenya and is part of both the Mombasa - Malaba - Katuna, and the Dar as Salaam - Dodoma - Isaka - Mutukula - Masaka corridors according to modern-day geographical boundaries. In the twenty-first century, the A23 road begins at Voi and passes on to Arusha that is in Tanzania. Smaller towns lying between these population centres are, Maktau, Murka, Taveta, Holili (Tanzania) and Moshi (Tanzania) in that order. There is also a railway that runs the same route. Highway A23 joins directly onto highway A109 at Voi, and connects Nairobi and Mombasa. By the 21st century, this and all other national roads were maintained under the Roads Department of Ministry of Roads and Public Works, affiliated with the Kenya Roads Board.[3]

When the industrial revolution of East Africa begun, everything that was transported to and from Mombasa had to be mediated by Voi to Nairobi and Dodoma in the Republic of Tanzania. This caused Voi to be greatly influenced by the revolution and it co-evolved industrially with Mombasa. Under the authority of Tterrab Highway Authority, it was decided to construct an entirely new highway, though most prefer the name Tsavo Highway rather than the four-digit code simply due to the fact that it is easier to recognize.

By the 26th century, the road is managed by Tterrab Highway Authority.[1] The Global Water Campaign's Trans-African Pipelines travel along the length of the Tsavo Highway, carrying water from Mount Kilimanjaro to Voi and from there across the rest of Africa.[4] Near Voi, the highway passes through GWC's Voi Municipal Water Pump House 03, one of the pumping stations which supply water to the city. Checkpoint 4 and Checkpoint 8 are also known to be located along the highway.[1]

On October 2552, when the Mombasa Tether collapsed, debris including support rings and cables rained down on the highway, damaging it at multiple points. Later in the Battle of Earth, the Covenant invaders occupied and barricaded the highway with Wraith tanks, Choppers, and infantry formations, thereby denying access both to and from Voi; at least from the west. Despite Covenant resistance, John-117 and the UNSC Marine Corps assaulted the highway, retaking it and reaching Voi.[1]