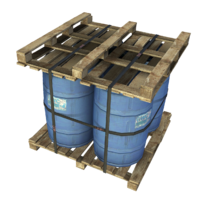 A stack of GWC water barrels.

The Global Water Campaign, or GWC, is a human government initiative specializing in purifying and distributing water.[1]

The initiative originated in the 24th Century in the East African Protectorate, where it purified and transported melt water from Mount Kilimanjaro. Most notably, the initiative operates the GWC Trans-African Pipelines that carry the still relatively clean melt water for distribution across the entire continent.[2] In addition to Earth, GWC was based on other UNSC colonies, including the agricultural regions of Reach.[3]

By the 26th century, the main water purification facility in Africa had fallen into disrepair, while other facilities still continued to be more or less active. It is apparent that the activity of the GWC continued elsewhere, as evidenced by the operational status of some of the initiative's facilities, and the fact that relatively new water barrels with "GWC" printed on them were still commonplace during 2552.[3][4]