Winter Contingency is the second level in the campaign of Halo: Reach and the first level to feature gameplay.[1] It immediately follows the first level Noble Actual, which includes the game's opening cinematic.

In the level, Noble Team is sent to Visegrad, a remote agricultural region of the planet Reach, to investigate a disturbance in the communications relay responsible for the planet's communications to the rest of the UNSC, and the disappearance of the Army troopers sent in to investigate before them.[2] Sabotage by insurrectionists is suspected, but the cause of the disruption is revealed to be a Covenant advance infiltration force.[3] At the Visegrad relay, Noble Team finds the corpse of a researcher alongside his surviving daughter. Shortly after, several Sangheili Zealots attack the Spartans, and after a brief scuffle they retreat deeper into the facility. Eventually Noble Team brings the relay back online, and contact Colonel Holland, declaring Winter Contingency.

Carter-A259 is shown from behind, looking over at the other Falcon.

Carter is shown from the front.

The camera shifts to behind the two Falcons.

Cut back to the second Falcon from Carter's point of view. 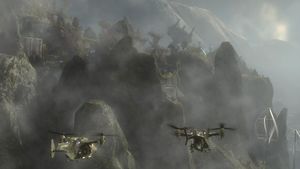 The Falcons arrive at Visegrád.

The two Falcons are once again shown from behind, from a greater distance. They are now approaching the outpost.

The Falcons bank left and hover over the outpost. Fade to black.

The two Falcons head in opposite directions as the Comm Relay Hub comes into view.

The Falcon circles for a landing.

The Falcons land side by side, and Carter jumps down.

Noble Six exits the Falcon along with Carter, Emile, and Kat. Jun and Jorge remain in their respective Falcons to provide sniper support.

A distress beacon has been detected near Visegrad Relay Outpost. Investigate and locate the beacon.

Six follows Noble Team down the hillside. Emile swiftly jumps on to the top of a boulder and checks the surrounding area.

The Spartans advance further down the hill.

Soon they come to a burning vehicle next to a small building. There are blood spatters on the ground near the wreckage, but no bodies. Emile begins inspecting a broken pallet on the ground and removes a red object from it. 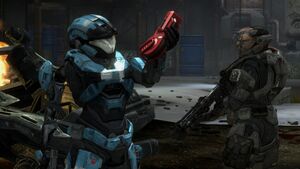 Emile tosses the beacon to Kat.

Kat drops the beacon on the ground.

If the player shoots at the gas tank nearby, detonating it:

Noble Team heads off to another cluster of buildings.

The team arrives at a house overlooking the cliffside.

Noble Six moves through the house. 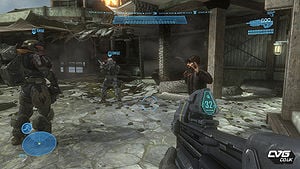 Noble Team meeting a civilian suspected of being an insurgent.

Six goes up a short flight of stairs and emerges on the other side of the house. The second Falcon lands in the courtyard long enough to drop Jorge off, then takes off. A door in the house opens, and a male civilian steps out. Other civilians can be seen remaining inside.

Emile aims his shotgun at the man as he and Jorge question him, but he appears to speak only in Hungarian.

Jorge questions him in Hungarian. The civilian begins talking as Jorge translates.

A new waypoint appears on the building in question. The farmer gets back inside as Noble Team sprints east toward the building. 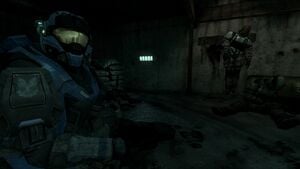 Carter and the corpses of the missing army troopers.

Inside, the Spartans find several human corpses, including two uniformed ones hanging from pegs on the wall. The ground is covered with blood.

Carter kneels down over the pools of blood and examines them. Avian footprints can be seen in the blood, moving across the floor.

Carter stands back up and signals the team to keep moving. They enter an adjacent room with another dead body. Movement is suddenly heard on the roof, and a brief hostile contact is detected on the motion tracker, which refreshes.

Noble Team heads into a nearby building.

Noble Team moves to a set of windows, where they see the contacts: Unggoy and Skirmishers. One of the Skirmishers sees Noble Team and begins squawking in alarm.

Noble Team engages the Covenant forces. Several Banshees begin to move in and are engaged by the Falcon.

Noble Team clears out the Covenant near the farm, while the Falcon shoots down the Banshees. A Spirit dropship touches down across a nearby bridge and begins deploying troops. 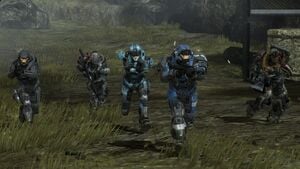 NOBLE Team moving across the valley.

Noble Team moves across the bridge, eliminating the Covenant forces.

Noble Team heads across the creek to engage more Covenant including a squad of Sangheili Ultras (and on higher difficulties, a Sangheili General), eventually defeating them.

Noble Six, Carter, and Jorge head to a flatbed truck, with Carter taking the passenger seat and Jorge standing in the truck bed, using his gun as a makeshift turret. Noble Six drives.

Recon the east valley and draw the Covenant's attention while Kat and Emile infiltrate the outpost.

Noble Six, Carter, and Jorge drive around, eliminating all Covenant they come across. There are three areas in the rain-soaked Visegrad: two buildings and a farmyard near a river.

As the team approaches the first building:

They clear out the Covenant inside the building.

The team moves on to the next location. The Spartans clear the area of Covenant.

If the player takes time finding the Troopers:

Note: The direction Jun calls out depends on the player's current location.

Six, Carter, and Jorge reach the third area. They spot gunfire and explosions from a Covenant landing site. Several Army troopers are pinned down by the Covenant forces. The three Spartans move to intervene and get out of the truck. 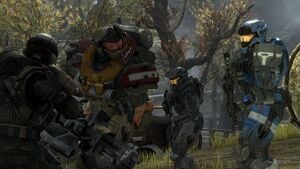 Noble Team and the troopers engage the Covenant and defeat them.

Covenant Spirits approach and drop off enemy reinforcements. Noble Team and 3 Charlie engage the Covenant, eventually clearing them out.

The troopers get into one Falcon and fly away, while Noble Team departs for the relay in the other.

Noble Team reaches the relay, finding a group of Covenant in the courtyard, including several Kig-Yar. Kat and Emile are pinned down inside the outpost. 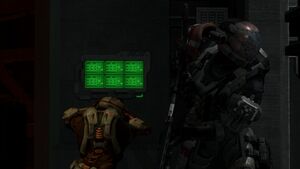 Kat works on unlocking the door while Emile covers the entrance.

The Falcon touches down. Carter, Jorge and Six get out and move to assist Emile and Kat.

Noble Team engage the Covenant infantry, but more and more troops are dropped in via Spirit dropships.

An overwhelming number of Covenant swarms across the courtyard. On Legendary difficulty an energy sword-wielding Sangheili General and a team of Spec Ops Elites are dropped off.

Noble Team withdraws to the relay's entrance as the door closes, shutting the Covenant out.

You've arrived at the Visegrad Relay Outpost. Advance inside.

Note: Carter may not always say this; it is unknown why this happens. He always says this if the player starts the level Rally Point Bravo.

Noble Six turns the corridor and finds a body.

Six begins to search the body. Carter attends to a wounded trooper leaning against the wall.

Noble Six finds a data module on the corpse and picks it up as Kat looks at the controls.

Jorge drags out a young female civilian, but she struggles to escape, repeatedly hitting him while speaking frantic Hungarian.

Jorge puts down his weapon and grabs her by both arms, easily restraining her. She stops struggling.

Jorge stiffens in alarm just as a Sangheili Field Marshal of the Devoted Sentries jumps down from an upper floor and ignites its energy sword. The alien slashes at Jorge, but he dodges the strike, pulling the civilian to the ground and covering her with his body. The Marshal snarls a challenge at the rest of Noble Team and charges. Two more Zealots jump down to support the Marshal. 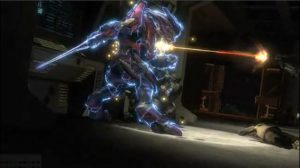 Noble Six fires his weapon at the Field Marshal.

Carter and Noble Six fire their assault rifles at the charging Sangheili, but his shields absorb the fire. The Marshal slashes at Kat, slicing through the monitors on the wall, but Carter knocks her out of the way just in time. The Field Marshal's shields collapse under sustained fire from Noble Six. The Sangheili charges Noble Six and, unable to bring his sword to bear, knocks the Spartan over before running towards the exit.

One of the Zealots grabs the fallen Noble Six by the neck and extends an Energy Dagger. The Zealot attempts to stab Noble Six, but Six blocks the strike and punches the Zealot across the face, stunning him momentarily. The Zealot recovers and roars in Six's face, but Carter kicks him off as Kat fires on it with her pistol. The Sangheili's shields flash and it scrambles back to escape. Carter kicks an assault rifle to Six.

The two Zealots head for another door leading deeper into the facility, one holding the wounded corporal as a shield and forcing Noble Team to hold their fire. The civilian girl begins screaming while the Zealots head through the door, taking the screaming corporal with them. The corporal tries to grab the doorjamb in a desperate attempt to break free, but the Zealot holding him easily drags him out of sight.

Noble Six reloads. They and Jorge head into the room, which Jorge then seals shut behind them. 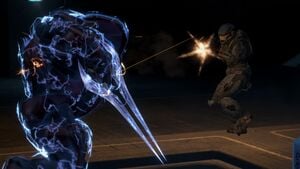 Six battles one of the Sangheili Zealots.

Jorge throws a flare into the darkness, illuminating the corridor and revealing a mob of hostile infantry blocking the way. Jorge and Six clear the room of Covenant, and head down the corridor into another large room housing computer servers.

A group of Special Operations Unggoy move to engage the two Spartans, but they are soon killed. Noble Six eliminates one of the Zealots. The second Zealot charges Six with an energy sword. Six kills this Zealot as well.

Noble Six goes into an adjacent room, finds the junction and resets it.

Jorge taps the civilian girl's shoulder, but she shoves his hand off. Emile chuckles.

Jorge takes his helmet off.

Jorge looks at the body. 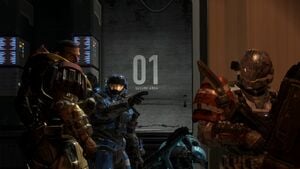 Jorge turns furiously to Emile, but Carter intervenes. Kat looks up from the panel briefly.

Jorge walks by Emile and glares at him, then helps Sára get on her feet.

Noble Team, with the exception of their leader, leaves the room. Holland's image appears on the screen.

The following achievements can be unlocked on Winter Contingency across the Xbox 360 and Halo: The Master Chief Collection editions of Halo: Reach.