This article is about the Covenant military rank. For UNSC rank of the same name, see General (UNICOM). 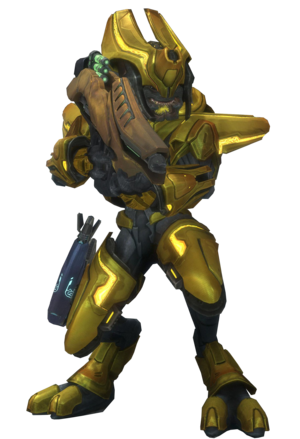 A Sangheili General within the Fleet of Valiant Prudence.

"Victory is secured, not from the throne, but from the front lines."
— The Sangheili General's mantra.[1]

General is a military rank in the armed forces of the Covenant empire, and its successor factions.[2] Generals serve their forces as high-tier frontline field commanders in charge of whole legions of warriors - working in the field in planetary warfare campaigns where direct occupation of enemy territory is a necessity.[3][2] For shorter-termed missions, a General may be granted the title of Field Master and given charge of assembling a temporary warhost for a specific mission.[2]

Generals within the Covenant military, as with all higher-ranking positions, were an exclusively-Sangheili role tasked with commanding legions or warhosts - a charge of oversight for hundreds or even thousands of subordinate warriors. They generally served as field commanders for long-term ground campaigns in disputed territories, and worked to oversee long-term military occupations, troop deployments and the execution of large-scale strategic goals.[4][5] During some campaigns, multiple Generals are required - each is expected to work in concert with the other(s) to cover all theatres of the war.[3] While predominantly working in a command role, Generals are experienced combatants in their own right - and only achieve their rank after many years of service on the front lines of battle.[5]

Although they predominantly serve as groundside commanders, the Covenant's lack of distinction between space and ground assets in a manner similar to the UNSC's NAVCOM and UNICOM delineations mean that Generals may also serve the Covenant fleet in the capacity of Shipmaster - one such example being General Ardo 'Moretumee, shipmaster of the Ceudar-pattern heavy corvette Ardent Prayer.[6][7]

Depending on the nature of a given mission, Generals are tasked with reporting directly to their superior Supreme Commander, or otherwise their Field Marshal agents.[4]

Generals, as with other senior Covenant leadership rates, are most typically seen donning a number of harness designs in a vivid gold colouration.[3] These harnesses are usually extremely ornate in nature, and contain much more resilient energy shielding than a standard combat harness.

Within Jul 'Mdama's Covenant remnant faction, Generals have some crossover with the title of Sangheili Warrior - with both donning similar equipment.[13]

Generals serve in the Banished in a limited capacity - though the organisation preferences the use of Sangheili Warlords to serve in equivalent roles.[14]

First introduced in Halo: Reach, Sangheili Generals are the equivalent to the Jiralhanae War Chieftain. Like other high ranking members in the Covenant, Sangheili Generals tend to wield superior weaponry and tend to apply more advanced battle tactics in the field, they are also more likely to employ equipment such as armor lock. How the player approaches a General depends on the type of weapon the person is carrying. It is typically best to keep your distance from a General armed with melee weapons, as they are fast and their melee is typically deadly depleting shields in one hit on higher difficulties, or in the case of the energy sword is an instant kill. A General wielding a fuel rod gun or a plasma launcher will not fire the weapon at close range, meaning it will typically pay to use a weapon like the plasma pistol and a plasma grenade to take down a General. Heavy weapons like the fuel rod gun or the M41 rocket launcher require two direct hits in order to take down a General. If a General carries a weapon other than an energy sword, his melees will be slow enough for the player to get behind him and assassinate him. A General can survive a plasma grenade stick, and a direct hit from a Spartan laser shot. A General at full health and shields will also survive a slash from an Energy Sword on all difficulties.

Killing a General in Warzone will award the team 25 VP and earn the player a Boss Takedown medal.