This article is about the Halo: Reach Easter egg. For the rank, see Sangheili Ranger Commander.

"Wipe them out..."
— Bungie.net description 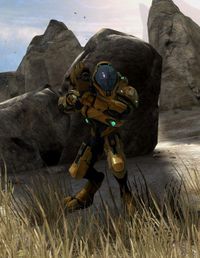 A BOB armed with a Fuel Rod Gun on Tip of the Spear.

BOBs are a special type of enemy encountered in Halo: Reach.

BOBs usually take the form of gold-armored Sangheili Rangers, but they have been known to take several forms, including white-armored Rangers or Banshees with infinite boost. The white-armored BOBs always dual-wield plasma rifles, regardless of rank. The gold-armored Ranger BOBs, on the other hand, have been seen with plasma rifles, plasma repeaters, concussion rifles, fuel rod guns, or energy swords. The BOBs' energy shields have the same strength of an Elite General.

Each BOB remains in-game for a limited time before vanishing. For some BOBs, this time frame begins as soon as it is alerted to the player's presence. For others, the countdown begins once the player enters a certain area, thus it is possible for the player to miss the BOB entirely if it is not spotted. When the limit is reached, the BOB activates active camouflage and disappears completely.

Killing a BOB will reward the player the "Seek and Destroy" medal.[1] However, the medal can only be viewed on Bungie.net. In the post-game carnage report, the BOB is referred to as an "Elite light vehicle". On Bungie.net and Halo Waypoint, their description is simply "Wipe them out."

The name "BOB" is a reference to Bungie's Marathon video game series. All human NPCs in the series are known as "BOBs". "BOB" is an acronym for "Born on Board", a reference to the characters having spent their entire lives aboard the eponymous colony ship.

BOBs were first considered Easter eggs in Halo: Reach. However, in 2015 it was revealed in the "Sangheili" article in the Universe section of Halo Waypoint that the gold-armored Ranger is indeed a canonical rank, the Sangheili Ranger Commander.[2] The white BOBs may also be canonical to some extent, as the Sangheili use a complex color coding which has never been properly depicted in the games, for gameplay purposes.[3] For example, a white Zealot has made a canonical appearance in Halo: Escalation Issue 15.