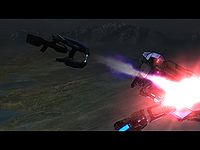 The Battle Rifle-Plasma Rifle, often abbreviated as the BR-PR, is a unique weapon consisting of a Battle Rifle attached to what appears to be a Plasma Rifle. It appears in the Halo 2 level Sacred Icon, during the level's opening cutscene Uncomfortable Silence, where the Arbiter is attacked by an Enforcer and is saved by Tartarus' Phantom. The weapon only appears off-screen, however, and as such it can only be seen if one moves the camera to a different angle by use of mods or other tools.[1]

While the weapon itself is not normally seen, there are a few hints at its presence. The rate of fire is faster than that of an ordinary Phantom Gun. The shots' point of origin is also partly visible at the edge of the screen and fires at both a different angle than the one the Phantom is travelling at immediately afterwards and is also closer than the Phantom would be. Additionally, throughout the cutscene, the Phantom itself does not have its lateral guns deployed.

Like the Scarab Gun, the BR-PR is a weapon that appears purely for cinematic effect, likely to make the shots appear more intense. Viewing the scene from a different angle reveals that the Phantom is actually dancing outside of view, while the weapon appears briefly to fire and disappears immediately after.

Looking through the game files reveals that Sacred Icon contains a weapon aptly called the "phantom turret" as well as a file for a handheld version of it.[2] It is not normally found on the level and can thus only be wielded by using mods. Just like the Scarab Gun the weapon appears as an ordinary plasma rifle that does not overheat and has a full, unlimited battery. The weapon fires shots like those of a Phantom's cannons, a Shade turret, or a Shadow's turret but at an immediately higher rate. When looking in the game files, battle rifle in BR-PR actually works as a scenery object. This battle rifle is not actually a battle rifle,it is just an object used to hold the phantom plasma rifle. Without the battle rifle, the plasma rifle would fall.

Curiously, a separate but completely identical weapon called the "big needler" exists in the game files of the levels Outskirts and Delta Halo.