Featured articles represent the reputation and identity of any wiki; as such, it is important to make sure every information in an article is factually correct and of proper format. Articles that satisfy the requirements will be featured on the main page. A small Legendary symbol (

) attached to the upper right-hand of any article indicates that that article has earned a "featured article" status.

To nominate an article for featured content, see the nomination page. Articles that successfully clear the nomination round will be added to the featured article template.

For an article to be considered as a featured article, it must meet the requirements listed below. It should be noted that criteria for such an article may vary but, often, such articles must be of exceptional writing quality, longer length, have a large supply of augmenting pictures, well-referenced, and must be sufficiently notable. 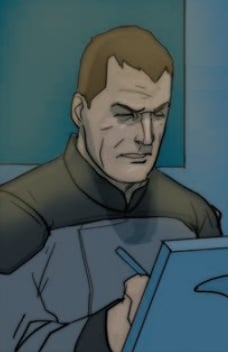 Admiral Preston Jeremiah Cole (service number 03956-26127-PC) was a UNSC Naval officer during both the Insurrection and the Human-Covenant War. Cole is best known for being the commander of the majority of the UNSC Navy from 2525 until 2543 and for his role in creating the Cole Protocol, a central UNSC law of the Human-Covenant War. A military genius, he defeated the Covenant in every major battle he fought and his battle record was considered to be without equal, even more impressive than that of the SPARTAN-IIs.