"We did not discover the full extent of those ruins and likely never will."
— Dr. Catherine Halsey[2]

The Menachite portal complex,[3] referred to as a "temple" by the Covenant,[4] and the Portal under the Mountain by the Covenant and Banished, is an underground slipspace portal facility built into Menachite Mountain on Reach by the Forerunners[5] The complex housed a unique slipspace crystal.

A view of the portal generator and beam emitters.

The Menachite complex was constructed and buried under Menachite Mountain, located amidst the Highland Mountains in the Viery Territory, Reach. When fully exposed, following the glassing of the mountain atop the complex, the larger complex slightly resembles the Portal at Voi on Earth. The structure is circular with a large ornate projector in the centre for projecting the slipspace portal itself. Eleven beam emitter stations on the complex's perimeter, each at the foot of an individual mountain, project beams into the middle to assist in powering the portal via unknown mechanisms. In ancient times, the Forerunners used the Menachite Forerunner crystal to power it,[6] but the crystal's removal did not prevent the portal's use. However, unlike the Portal at Voi, this portal would only remain active for as long as the local charge lasted. Once it dissipated, the portal would close once again.

Part of the underground complex was situated under the site of CASTLE Base. Thanks to Titanium mining operations in Reach's early history prior to the establishment of CASTLE facility, parts of the complex were exposed in underground tunnels known to and studied by the Office of Naval Intelligence.

The outside of the complex resembles granite rock, with passages allowing access along the wall. The wall has a long stretch of glyphs trailing along it that twist into a spiral mosaic and vanish into ever-smaller curls. The glyphs are part of the wall's material, described as being composed of glittering mica inclusions in the granite matrix. The glyphs themselves are a series of squares, triangles, bars, and dots, and blur out of focus when someone looks at them directly.[7]

When Frederic-104's blood touched the wall, a transformation occurred.[8] The glyphs began to emit a soft red glow comparable to heated metal. The glow spread outward from point at which his blood touched the wall, and the colors in the center began warming to orange and then to yellow-gold. A single white glyph, a triangle, became visible in the center of the spiral. Despite the emission of light, the glyphs did not radiate heat. When SPARTAN-104 touched this glyph with his bare fingertip, all the glyphs along the entire wall glowed white with brilliant illumination. After a moment, the wall itself rumpled and transformed into a corridor leading into the complex.[8]

The corridor was twenty meters in height, leading inward at a straight line that gently sloped deeper into the ground. Golden light shined from the ceiling.[9] The floor was paved with asymmetric blue tiles patterned in a way comparable to waves lapping on a shore. The utterly smooth walls were inlaid with centered four-meter tall gold glyphs made of similar shapes of triangles, squares, bars, and circles. When the glyphs began to softly glow, SPARTAN-104 felt himself attracted to them, but resisted his impulse to approach them on an intuitive suspicion that they were dangerous.[10] His radiation counter briefly pulsed, supporting his hesitation.[10]

Further down the corridor, the ceiling stopped shining golden light and faded to total black. Pinpoint lights emerged imitating stars, which twinkled realistically.[9] In addition, silver-gray orbs that represented moons pockmarked with craters spun in wide orbits across the ceiling. Along the walls, tall green bamboo-like stalks appeared.[9] Dr. Halsey determined that these apparitions were semisolid holograms with no visible emitters;[9] in actuality, hard light decor present in most Forerunner constructs.[11]

Throughout the length of the corridor, the holography underwent three transformations to depict different scenes, each sharing the golden glyphs along the walls. After the initial scene, it changed to depict an arid moonscape with deep craters and sterile light. It then transformed into a volcanic world with active streams of lava flowing along the walls. The realism of this scene was enhanced with realistic distortion of the air, which wavered as it would in the presence of extreme heat.[9]

The corridor empties onto a landing overlooking an approximately circular room with a diameter of three kilometers, the center of which contains a flickering pedestal[12] that holds the Forerunner crystal.[13] The landing is on one of twelve tiered levels that have no railings and encircle the room. The floor, approximately one hundred meters beneath the landing, is made of innumerable blue tiles that appear to shift around into patterns SPARTAN-104 describes as "frustratingly familiar".[12] Unlike the floor in the corridor, these tiles form squares, circles, bars, and triangles.[14] The ceiling is a dome with a holographic golden sun, a dozen moons,[15] blue sky, and cottony clouds that morph into geometric shapes such as spheres, pyramids, bars, and cubes.[12]

When Dr. Halsey and her Spartans approached the pedestal, they experienced spatial disorientation in which their path was distorted. Despite their attempts to reach the center as a close group, they found themselves heading off in separate directions. SPARTAN-104 described feeling a sense of vertigo as if he was walking on the ceiling instead of the floor.[16] A test of rolling a ball bearing on the ground showed the floor initially sloped toward the center, but shifted around as the ball bearing rolled until it came to a total stop.[16] Kelly-087 was able to intuitively determine the true direction toward the pedestal, ostensibly the opposite direction.[16] The pedestal in the center is made of the same gold material as the symbols in the corridor. Above it floated a Forerunner crystal, which spun and pulsed a bright glow of sapphire-blue light.[13]

Although assumed by Dr. Halsey to be an effect of the crystal artifact,[17] the spatial distortion effects near the center of the main chamber may have been generated by a baffler, a Forerunner device used to create geometric distortions to hide an artifact or a location, or a dazzler, a Forerunner device employing a camouflage technique that causes visual and auditory delusion.[18]

The Menachite portal complex was created in prehistory by the Forerunners to allow for transportation to the extragalactic Installation 00. After humans colonized Reach, they tunneled into the mountain for purposes of mining its rich titanium content. The Office of Naval Intelligence took over the mountain after the mine was built and installed CASTLE Base into the tunnels originally created for the mine. Colonel James Ackerson of ONI knew of the existence of the Menachite Forerunner Complex, and made uncovering its secrets a secret project. He was, however, unable to learn of its entrance. The entrance was later discovered by Frederic-104 by accident and his group gained entry into the complex.

When the Covenant invaded Reach, they began digging into the mountain in search of the crystal. Dr. Catherine Halsey, along with SPARTANs 030, 039, 043, 087, and 104, fled the endangered CASTLE Base and into the remaining mine tunnels. There they discovered the outer part of the complex and managed to gain entrance. Just after they took the Forerunner crystal, Covenant forces successfully blasted their way into the complex, and Covenant infantry killed Isaac and Vinh, although the others managed to retreat into a deep tunnel. After some time, John-117 along with a small human force assaulted the main chamber with a captured Spirit dropship. They managed to rescue the remaining SPARTANs and Dr. Halsey, and then outran thousands of Covenant soldiers trying to capture the crystal.

Following the Fall of Reach in 2552, the Covenant Hierarchs had tasked Tartarus with discovering the "Portal under the Mountain," as they called it. After the destruction of the Holy Light—a slipspace flake taken by Spartan-II Blue Team from the Forerunner structure beneath Menachite Mountain—during the battle at Eridanus Secundus, Tartarus sent eight squadrons to comb the area for any remains. Three shards of the slipspace flake were found and presented to the Prophet of Truth on High Charity. When Truth left High Charity, he brought the shards aboard the Forerunner Dreadnought. Since the portal on Earth was found first, the need to search Reach for a portal that would take Truth to the Ark was eliminated.[19]

In 2559, War Chief Escharum received a message from Atriox, still embroiled in a conflict on the Ark, informing him of the existence of the Portal under the Mountain as well as his plan to return to the galaxy. Atriox ordered Escharum to find the portal and activate it in preparation of his arrival. Escharum, in turn, sent the Keepers of the One Freedom, the Legion of the Corpse-Moon, and the Ravaged Tusks—all factions that had recently joined the Banished—to search for the portal and report back to him when they had found it.[19] 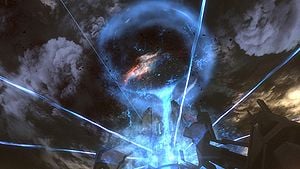 The Portal under the Mountain.

By following Blue Team to CASTLE Base, Castor, a Dokab of the Keepers, discovered the location of the portal, as the human military facility sought by the Spartans had been built atop the Forerunner facility. Escharum joined the Keepers in the activation of the portal. Using the three shards of Menachite Forerunner crystal which had been recovered from the Forerunner Dreadnought on the Ark, Atriox passed through the portal and returned to the galaxy. Castor and his Keepers then defected from the Banished, taking Atriox's Eklon'Dal Workshop Lich through the portal to the Ark, where they intended to light the rings and begin the Great Journey.[20] Soon after they passed through the portal, it collapsed inward on itself.[21]