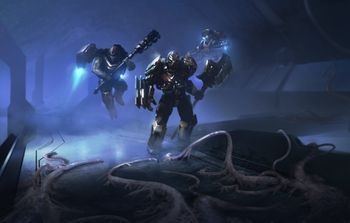 Voridus and several Jiralhanae Jumpers inside the Archive.

The Archive is a Forerunner structure located far underneath the surface of the Ark, relatively near to the crash site of High Charity. The installation is connected to the defensive network of Sentinels on the Ark.[1]

Following the outbreak of the Flood on the Ark in 2559, troops led by Voridus retreated to an exterior entrance to the Archive to use as a defensive position against the onslaught of parasite, though the way was blocked by a gargantuan tentacle belonging to the Proto-Gravemind. Thanks to the drilling operation led by Pavium, Voridus and his forces were able to get past the obstruction and enter the Archive. After an extensive elevator ride down into the structure, Voridus and his troops found the installation already infested with a large Flood outbreak of its own. However, the facility defences were still operational, allowing Voridus to use them to help eradicate the Flood. Eventually, they were able to reach a control terminal and reactivate the Ark's Sentinel defenses in the region.[1]