This article is about the structure. For other uses of "Cartographer", see Cartographer (disambiguation).

Installation 00's Cartographer, showing a schematic of the construct.

The Cartographer is a dedicated Forerunner facility designed to contain and provide access to the Silent Cartographer, a program featuring the complete real-time record and schematics of an installation.[1]

A central component of any installation of Forerunner construction, it is found on nearly all of their megastructures, such as the Halo Array and the shield worlds.[2] Some installations contain a number of discrete Cartographer facilities.[3]

When activated, a Cartographer provides a real-time holographic map which can be used to navigate the massive expanse that is an installation, along with other relevant information such as pinpointing every room or location within the vast structure. The Cartographer facilities on the various Forerunner installations differ in layout and design, though the primary map rooms on the Halo installations are buried within large structures housing a network of compartments and rooms. Due to their significance, the Cartographers are protected by multiple security measures.[2]

An artificial intelligence is able to interface with the Silent Cartographer and, for example, set navigation points on the holographic projection.[2] A Forerunner armor's personal ancilla was able to link with the Cartographer and provide packets of information on the installation's past activities directly into the wearer's brain.[4]

On at the very least Installation 07, due to security protocols, data taken from the Conspectus network could only be decrypted via ports in the ring's Cartographer facilities or at the Conservatory.[7]

Like all installations involved with the Halos, the greater Ark possessed a Cartographer. During the final weeks of the Forerunner-Flood war, this facility was the site of an emergency meeting between the Forerunner military leaders before the imminent Flood attack on the greater Ark. The commanders conferred in a circle within an enormous hologram of the Ark while updates on the installation's status were provided through their ancillas.[4] Omega Halo, the sole Halo ring present at the Ark at the time, was also projected in the hologram.[8]

The Cartographer's exterior on Installation 00.

Installation 00, the Ark, was home to several Cartographers.[3] One of the facilities was located on top of a massive spire structure, the map room itself lying in a wide open area giving a panoramic view over a massive waterfall and an ocean. Facing the desert on the other side, the Cartographer structure was protected by a large wall structure. Inside the wall was a deep chasm and an energy bridge allowing passage over it. A Terminal was located within the wall near the activation switch for the energy bridge. The interiors of this Cartographer shared many architectural similarities with Alpha Halo's Cartographer shaft, although the two are considerably different in general layout.[6]

Preceding the firing of the Halos in 97,445 BCE, the IsoDidact and 343 Guilty Spark visited the Ark's Cartographer to review the preparations for the Halo Array's deployment.[9] When the UNSC and Sangheili forces landed on the Ark during the Battle of Installation 00 in 2552, they were prevented access to the Cartographer by its exterior wall. After the UNSC Forward Unto Dawn landed nearby and deployed a convoy of multiple vehicles, Commander Keyes suggested they go through the wall. The UNSC forces returned to the wall and with the assistance of 343 Guilty Spark, successfully passed through. The UNSC and the Sangheili breached the Covenant-held Cartographer with the aid of 343 Guilty Spark, and used the map facility to locate the Prophet of Truth and determine the Ark's location in intergalactic space with the Cartographer's star map. Though they were quickly driven off by attacking Covenant forces, the Cartographer revealed to Spark the existence of Installation 08, a newly-constructed replacement for his own lost installation.[6]

Another one of the Ark's Cartographers, radically different in layout and design from the one encountered in 2552, was utilized by the Banished during their occupation of the Ark in 2559 to map out the megastructure and take control of its portal network. During the Second Ark Conflict between the Banished and the UNSC forces from the UNSC Spirit of Fire, the latter assaulted and successfully took control of the Cartographer. From the Cartographer, Professor Ellen Anders learned of Atriox's use of it to take control of the portal network,[10] leading to a successful mission to cripple Atriox's ability to use the network.[11] In addition, Anders learned about the Ark's weapons systems through the Cartographer.[10] Isabel later used this information to have the Spirit of Fire's crew take over one of the Ark's particle cannons to immobilize the Banished CAS-class assault carrier Enduring Conviction and take down its shields as part of a plan to destroy the ship.[12]

Another Cartographer, located on the Epsilon Spire, was utilized by the Keepers of the One Freedom, Prelate Dhas Bhasvod's Covenant loyalists and Intrepid Eye to locate a facility on the Ark from which the Halo Array could be fired following the destruction of the Installation 00 Citadel. Responding to Veta Lopis' status as a Reclaimer, the Cartographer's defenses allowed them through where the Cartographer's submonitor directed them to Epsilon Clarion, the only facility in the Clarion network that was either accessible or operable.[13] 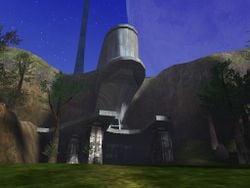 On Installation 04, the Cartographer was located in an immense underground facility, below the middle of a large island. It was protected by a security system accessible by another underground facility on the other side of the island. These facilities were a part of the installation's larger tunnel network, with a massive shaft leading to the depths of the megastructure in between them.

After disabling the security system, the main passageway to the map room was opened. For additional security measures, the Cartographer's chamber and activation panel were located on the other side of the island, and buried at least half a dozen floors below ground. The path down to the Cartographer was a labyrinth of twists and turns, making it easy to get lost.[14]

On September 20, 2552, Spartan John-117 and two squads of marines were ordered by Captain Jacob Keyes to secure the Cartographer so that they could locate Halo's control room. The soldiers landed on a Covenant-controlled beach, which they quickly captured. The Spartan soon entered the Cartographer facility, though it had been locked from within. After disabling the lock at a nearby security station, the Spartan accessed the Cartographer, learning the location of Installation 04's control room. The AI Cortana then requested that Flight Captain Carol "Foehammer" Rawley fly John-117 below ground to the control room, though they stopped at Alpha Base.[14][15]

The Cartographer of Installation 07, one of the original twelve Halos, was a massive structure, surpassing all of the other known Cartographer sites in scale. The map room was housed in an enormous, triangular structure protruding toward the Halo's interior out of one of the walls lining the ring's edges. The structure was shaped like a flat-topped wedge around 500 kilometers wide at its base, where it connected with the Halo's edge wall and was around 400 kilometers long from base to tip. Most of the structure's upper surface, apart from the tip, appeared largely uniform and featureless when observed from a distance. However, the wedge's tip housed a complex of vast, secondary structures, some of them dozens of kilometers high. A sleek half-arch stretched beyond the wedge's tip and an ornate lattice of cabling attached to this structure supported the main Cartographer control center, itself a complex of enormous structures, each of them the size of a small city.[16]

The control center itself housed a series of platforms and walkways, some of them crisscrossing in many directions and facing a variety of complex display terminals monitoring the Halo's systems. Some of the walkways actually faced up- or downward in right angles and allowed passage by means of localized gravity manipulation along their surfaces.[17]

Like several other control facilities across the ring, the Cartographer was equipped with stations allowing biological beings to interface with the Halo's systems in an emergency. During Mendicant Bias' and the Primordial's attempt to save the ring from collision with the wolf-faced planet, Chakas and a number of other humans were connected to one of these systems along with Composer-processed Forerunners, the latter supposedly necessary because the humans alone did not possess the knowledge or intellect necessary to properly interface with the ring despite having been previously imprinted with the knowledge necessary for the task.[18]

This system used an elaborate webbing projected by a rod-like object to directly connect to each human-Forerunner pair via their skin, completely melding their neural networks with the Cartographer's controls. With the individual's consciousness now merged with the Halo's computer systems, they were flooded with the vast amounts of information and sensory input flowing through the Cartographer. The organic controllers, along with the Halo, formed a cybernetic gestalt intelligence which perceived the surrounding reality through the Halo's sensor systems and abstractions provided by the Cartographer.[19] Numerous different event-paths and outcomes were consistently being calculated and processed while the controllers steered the ring and incessantly performed minute adjustments to its numerous systems.[20] After the IsoDidact arrived to retake the ring, he entered the Cartographer and connected to the system with Chakas in order to see the ongoing salvage effort to the end.[21]

By 2558, the Cartographer had been destroyed and its function transferred to the former Mendicant Bias' core.[22] The new Cartographer was visited by Rion Forge and 343 Guilty Spark who had once been Chakas when he was human. When Spark accessed the Cartographer, he was able to access Zeta Halo's records and discovered that a record of a single very old event had been deleted by an unknown party. Having been led to Installation 07 by the Librarian's coordinate key, Spark inserted it into the Cartographer while Rion activated it as a Reclaimer. The Cartographer displayed a star map pointing to a location on New Carthage and provided the two with the second part of the coordinate key. However, Rion was suddenly pulled through a slipspace portal to Erebus VII by the Precept.[5]

On April 27, 2560, Submonitor 091 Adjutant Veridity revealed to the boat crew that, due to security protocols, the data that had been stolen by the Banished from the Conspectus network could only be decrypted via ports in the ring's Cartographer facilities or at the Conservatory.[7]

A Forerunner city in what the Office of Naval Intelligence referred to as Zone 67 on Onyx was home to a Cartographer facility. This map room was located below a massive domed structure in the city.[23] From the outside, the facility could be accessed via one of seven massive landing pads inside the structure's dome. Below the landing pad, a spiraling staircase led down into a smaller chamber.[24] The chamber housed an energy bridge leading into the map room itself: a half-spherical chamber about 20 meters across. The center of the room housed a holographic console which could project detailed schematics of the entire Onyx megastructure.[25] The room also featured a translocation platform.[26]

Dr. Halsey used this Cartographer structure during the Onyx Conflict, when she was trying to find a way to the portal that led to the shield world in the core of the artificial planet.[27]

The multiplayer level Construct takes place in the Cartographer building of Installation 00.