"So...am I the only one freaked out by the fact that we're inside the planet?"
— Serina

Trove (Shield World 0459) was a shield installation constructed by the Forerunners, located in the Korinth Prior system.[2] In formal cadence, Trove was known as the Etran Harborage,[6] owing to the Apex Site housed within which served as a port for a fleet of Sojourner-class dreadnoughts and their docking battle stations.[2][7] In addition to these functions, Trove served as a conservation sphere, and was intended to protect sentient lifeforms from the effects of the Halo Array and the Flood.[5]

Despite shield worlds being created as a haven from the Halos and the Flood, the external surface was heavily infested with Flood biomass, with forms of various types freely roaming across the surface. Sentinels were a rarity on the outside, but this changed within the center, where the many Forerunner constructs worked to prevent the Flood from claiming the interior as well.[8][9][3]

Trove was discovered by the Covenant sometime prior to 2531. It was subsequently destroyed at the end of a battle in February of that year.[3] Though a debris field persisted until 2557, it was destroyed by a UNSC fleet on June 29 following its discovery in order to keep it out of the hands of Gek 'Lhar, Jul 'Mdama's Covenant and anyone else who would try to exploit the surviving technologies for their own benefit.[4]

This shield world's main structure consisted of the outer surface, the superstructure and tunnel system inside the crust, and the inner miniature Dyson sphere, along with its own miniaturized artificial sun to provide illumination. A series of latitudinal support ribs encircled the megastructure; these were clearly visible on the inner surface. The outer surface, as well as parts of the superstructure, were largely infested with Flood forms. Some of the Flood even reached the interior of the world through openings such as vents, but because of the larger numbers of Sentinels, never managed to fully infest it.

The ecosystems of the interior and the exterior were radically different, the outer surface being a rocky wasteland with large bodies of water and Flood biomass in some areas. The atmosphere was thick with dust, which may have been a defensive measure to disable starships and prevent them from carrying the Flood off-world.[10] Parts of the superstructure could be seen on the surface, with chasms reaching deep down into the interior.

The inner Dyson shell was completely terraformed and full of plant and animal life, much like the Halo installations or the Ark. It featured different types of Forerunner structures, ranging from spires to various walls or embankments and rifts leading into the interior of the structure. Like many other Forerunner installations, Trove possessed a translocation grid in form of a network of teleporters.[8] 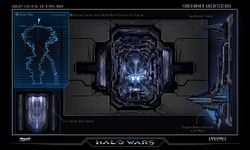 The surface of Trove had multiple access portals, which could be used to gain access to the interior of the planet. Most of them were likely hidden; for example, the portal through which the UNSC Spirit of Fire entered the interior was covered under a large body of water. The AI in control of these access portals would activate docking sequence when a ship passed over one, forcibly dragging the vessel inside by way of a series of field-projecting pylons on the outer surface.[11]

The tunnels inside the structure had a cleansing system which prevented the Flood from entering the interior. This quarantine system consisted of several "cleansing rings", which generated energy fields within their diameter, which would destroy any Flood biomass on a passing ship.[12] On the interior, these portals had six interlocks that needed to be opened in order to unlock the access to the tunnel, and like other significant systems on the installation, they could be operated only by a Reclaimer.[3] However, these interlocks only appeared to be triggered by the presence of the Flood nearby as the Covenant were able to enter and exit the interior shield world at will.

The Apex Site was an installation comprised of a control center on a platform high above the inner surface of Trove, and numerous docking towers containing a fleet of Forerunner Sojourner-class dreadnoughts. The control center was accessible from the ground by a teleporter at the Apex Base Site, which was situated on top of a plateau with a series of ramps leading up to it.[9]

Trove was constructed during or prior to the Forerunner-Flood war to serve as both a military outpost to combat the Flood, and to preserve the lifeforms within from the Halo Array's pulse. The shield world was fitted with a fleet of Sojourner-class dreadnaughts, ready to be used to raze the inner surface in case of breach by Flood forces or as an exploratory emergence group to be used following the Great Purification. During the height of the war, the shield world was attacked and its surface overrun by Flood forces, an event which was able to severely damage the installation's Monitor, 295 Harken Watch. Three Prometheans, Animus-To-Remain, Malice-Begets-Demise and Habit-To-Sever, stayed behind on the shield world's surface and gave their lives to defend the Monitor from encroaching Flood - ultimately allowing the Monitor to escape and seal the shield world's interior off.[2]

The Flood contamination on the shield world's exterior remained present for millennia following the firing of the Halo Array. However, a later UNSC expedition to the shield world's ruins suspected the outbreak to be relatively recently as of the 26th century.[6]

"This world shall be the birthplace for an invasion fleet beyond imagining!"
— Prophet of Regret

Trove was discovered by the Covenant several years before 2531, but then-current Covenant technology could not unlock its secrets. At the outset of the war with humanity, the Covenant expedited the need to unlock the planet's secrets as to amass a great fleet. They were soon able to break into the interior of the shield world and seal it, though the external Flood infection were noted as persistent. The Prophet of Regret sent Arbiter Ripa 'Moramee to the planet Harvest to investigate a Forerunner relic there that could have held the key.[13]

With the Human-Covenant War ongoing, the Covenant hoped to use the shield world's stored warships to crush the UNSC quickly, rather than wage the protracted war. However, they soon discovered that while they were able to access the installation, they were unable to reactivate the fleet.[14]

After the Covenant had observed Professor Ellen Anders activating the Forerunner relic on Harvest, the Prophet of Regret ordered the Arbiter to go to Arcadia and capture her, as she seemed to have valuable knowledge about the Forerunners. The Arbiter returned to Arcadia on February 10, captured Anders and brought her to the shield world. Captain James Cutter, commanding officer of the UNSC Spirit of Fire, to which Anders had been assigned, ordered immediate pursuit out-system.[15]

Destruction of the shield world.

Spirit of Fire arrived in orbit over the shield world, which appeared to be a normal, albeit desolate planet, on February 23. Ground forces were dispatched to the surface, where they discovered the Flood. Many of the reconnaissance teams were infected and it was discovered that Anders' transponder signal was being duplicated by a Proto-Gravemind; eventually, the Proto-Gravemind was killed in a concerted attack.[16] A few hours later, the Spirit's shipboard AI Serina scanned the planet for the professor's signal, which seemed to be originating from an ocean; the ship was suddenly pulled into the shield world's internal docking mechanism. After passing the tunnels inside the installation's superstructure, the Spirit of Fire emerged within the internal Dyson sphere.

Some time later, the Arbiter used Anders, who had been kept prisoner at the Apex Site, to activate the fleet of Forerunner ships. However, as the awestruck Sangheili watched the fleet's activation, Anders managed to escape via the installation's teleportation grid and regroup with the other humans.[8] She then created a plan to prevent the Covenant from using the Forerunner fleet which involved transporting the reactor of the Spirit of Fire's Shaw-Fujikawa Translight Engine to the Apex Site and from there into Trove's artificial sun.[9] Once the Spirit of Fire opened the door interlocks blocking the Spirit of Fire from exiting the shield world, Sergeant John Forge detonated the reactor inside the sun, causing it to go supernova. The supernova obliterated the Dyson sphere and caused the outer planet to blow up in an immense explosion that left a massive debris cloud.

The destruction of Trove destroyed the Flood and Covenant forces on the planet as well as the Forerunner fleet, depriving the Covenant of their planned advantage over the humans using the ships. However, using their Slipspace drive to destroy the planet resulted in the Spirit of Fire being stranded far from human space with no way home.[3]

After hijacking the UNSC Rubicon in 2554, 343 Guilty Spark intended to take the ship to Trove to obtain an upgrade seed in order to better prepare the ship for his planned mission to find the Librarian. However, the ship was destroyed before he could complete the journey and Spark had been unable to connect with the shield world's ancilla, 295 Harken Watch, for some time, leaving him unaware that the planet had been destroyed.[17]

The debris field that was left by Trove's destruction was eventually rediscovered by the Ace of Spades in 2557 with the ship's captain, Rion Forge, searching for the UNSC Spirit of Fire and her missing father John Forge. The ship was able to recover Little Bit, a fragment of the shield world's AI and learn of what had happened.[18] The crew was later forced to turn over what it had learned to ONI along with Little Bit.[19] 343 Guilty Spark and Niko eventually managed to extract a copy of Little Bit from his projections on where the Spirit of Fire had gone after leaving the shield world and fully repair him. Little Bit would go on to become the Ace of Spades AI.[20]

Main article: Mission to the Korinth Prior system

Using the data from the Ace of Spades and Little Bit, the prowler UNSC Taurokado embarked upon a mission to the debris field where it encountered a Covenant battlegroup led by Gek 'Lhar. The Taurokado retreated from the system following the encounter while the Covenant forces began harvesting the remnants for their own usage.

At the same time, in order to complete his mission, Spark brought the Ace of Spades back to Trove to get an upgrade seed for the ship, unaware that the planet had been destroyed. As further incentive for the crew to help him, Spark offered access to the wealth of Forerunner technology within as much needed salvage. As the salvage ship struggled to evade the Covenant, a massive UNSC fleet emerged from slipspace and opened fire on the debris field with nuclear weapons to deny its assets to the Covenant. The nuclear weapons would blow the debris to bits and disrupt its gravity around the system's dwarf star. Whatever survived would likely be pulled into the star itself, completely eradicating the shield world. The Covenant fleet retreated into slipspace to avoid being destroyed while Spark managed to get the Ace of Spades into slipspace in time to avoid destruction as well.[4]