This is about the Forerunner constructs. For the UNSC AI type, see Navy Sentinel. For the achievement, see Sentinels (achievement). 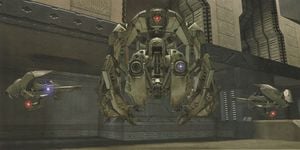 An Enforcer flanked by two Aggressors.

Sentinels are machine-servants[1] created by the Forerunners, designed for the construction, maintenance and defense of their structures and facilities.[2] Various Sentinel variants exist, each tailored to a specific task; because of its ubiquity, the Aggressor variant is often referred to simply as the "Sentinel". Most variants are produced by Sentinel manufacturing facilities, Sentinel factories, or Sentinel launchers. The Sentinels were revered by the Covenant as "holy warriors of the Sacred Rings",[3][4] despite engaging them in combat on various occasions.

The Sentinels follow the command of the monitor or other ancilla that is in charge of the facility they are assigned to, but even without central direction, they are able to respond to threats against their assigned installations with remarkable coordination and effectiveness.[5][6] On Installation 00, a sentinel defense network is used to coordinate the Sentinels on the Ark despite the monitor no longer being present. Sentinels follow their directives even if this entails engaging other Forerunner machines. For example, the Aggressor Sentinels of Requiem remained loyal to the Librarian against the Didact's Prometheans in 2557. Another instance is when the Constructors of Genesis remained loyal to Monitor Exuberant Witness against the Created's Promethean forces in 2558.

The Smart AI Isabel manipulated the Sentinel Defense Network to her own ends by hijacking Enduring Conviction and firing its energy projector on the Ark, causing Aggressor Sentinels to swarm on the ship and bisect it.[9]