"Sentinels! The holy warriors of the sacred rings!"
— A Special Operations Sangheili exclaimed upon seeing Aggressor Sentinels in the Threshold gas mine[4]

John-117 has a face-to-face encounter with an Aggressor Sentinel on Installation 00.

Aggressor Sentinels have two arm-like appendages, with two fine manipulators at the end of each arm. Their central head rests above a curved undercarriage generally housing an offensive sterlization beam. Their powerful beam weapons and defensive energy shields make them very effective in combat against intruders or foreign objects that present themselves as threats. Aggressor Sentinels are also equipped with a small reconstitution emitter, which uses lasers to repair damaged Forerunner constructs in conjunction with Constructors and for self-repair should the Aggressors be damaged in combat.[6] Aggressors are propelled by both an anti-gravity unit located on the undercarriage and small, exotic form of impulse drive which enables them to travel at high speeds.[2] They are also capable of tapping into their installation's teleportation grid.[2]

There are at least two major variants of the Aggressor Sentinel. The standard model is gray or silver in color while the specialized Aggressor Sentinel Eliminator is golden. The differences between the two variants lie solely on their offensive and defensive systems, with the Eliminator sporting superior weaponry and shielding systems.[7][8][3] 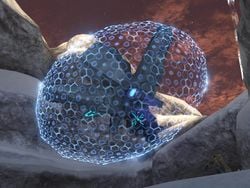 Aggressor Sentinels were deployed in massive numbers during the Forerunner-Flood war.[1] Unlike their own biological soldiers that could be converted into biomass, the mechanical nature of the Aggressor Sentinels allowed the Forerunners to battle the Flood without contributing to its numbers.[6] Billions are estimated to be active across the myriad of Forerunner installations where they are utilized as all-purpose workers and guards.[1] Following the construction of the Halo Array, they were installed on the ringworlds as their first line of defense against Flood outbreaks and other external threats. Controlled by their own basic ancilla functions, as well as their installation's monitor, Aggressors patrol the installation's vast terrain and network tunnels tirelessly and attack as their protocol demands.[6]

When not in combat, Aggressors serve as basic repair, maintenance, and security drones for Forerunner installations and facilities where Flood samples are kept, working in conjunction with Constructors and Enforcers to ensure that the facility remains in working order.[7]

The keyship Anodyne Spirit was equipped with its own contingent of Aggressor Sentinels. The San'Shyuum managed to adapt these machines to serve them in a combat support role, using them in battles during the War of Beginnings before the Covenant's formation.[11] The war depleted the keyship's Sentinel contingent almost completely, and the few that remained in High Charity were regarded as relics to be preserved and were no longer used in combat.[12]

Aggressor Sentinels are the first automated defense systems to assist a in a given situation and generate a proper response protocol, deploying to an area of interest via wall-mounted launchers.[7][3] While Aggressors are strong enough to handle small-scale battles, they are more of a supplement rather than a reliable combat system. The Aggressors' weapons systems are limited and not as powerful as some of the other Forerunner weapons employed against the Flood.[7][8] Because of their limited ancilla, they are only individually able to handle situations on a basic scale, which makes them vulnerable to strategic Flood attacks.[10] Their limited intelligence means they are often unable to perform evasive maneuvers when facing imminent attack and are usually destroyed.[7][8][3] In overwhelming numbers, Aggressors are capable of impressive coordination and are more than capable of handling a situation for a certain time until more permanent measures can be applied.[10]

The Aggressor's energy shield is their primary defense mechanism. Once taken down, it is susceptible to small-arms fire. When an Aggressor has been damaged beyond repair, it explodes violently and releases a powerful electromagnetic pulse, a tactical last resort that disables all nearby electronics.[7][8] If all other members of a swarm of Aggressors have been destroyed, the last remaining Aggressors have, on occasion, been observed to overload their core while attempting to ram nearby belligerents.[3]

When faced with a single threat of sufficient physical size, such as a capital ship, Aggressors have been known to deploy en masse and create a swarm. Instead of using their individual weapons, they fly in formation and use their bodies as projectiles, causing enough damage to end the threat. This was seen during the conflict on Installation 00 in 2559, when Enduring Conviction's energy projector was fired upon the surface of the Ark, breaking the installation's outer crust. Thousands of Aggressors on the installation were quick to respond, using their combined mass to tear the ship's hull apart and cut it into two pieces.[13]

Evolution of the Aggressor Sentinel's design from Halo: Combat Evolved to Halo 4.

Changes from Halo 2 to Halo 3[edit]

Changes from Halo 3 to Halo 4[edit]

Changes from Halo 4 to Halo Infinite[edit]

Aggressors appear in both campaign and Skirmish mode of Halo Wars, serving as an air unit. In campaign, Aggressors are the primary Forerunner unit, appearing on levels set within Trove. Like all Forerunner units, they are hostile towards all three other factions, including UNSC, Covenant, and the Flood. They are produced from invisible spawn points that could not be targetted or destroyed.

In Skirmish mode, neutral Aggressors are seen defending Forerunner forts, which occupied base build sites, and bonus buildings such as the Forerunner supply elevator or Forerunner secondary reactor. Player-aligned Aggressors are only found on Skirmish maps Repository and Glacial Ravine. These two maps feature Sentinel factories, where players can purchase Aggressors which can then be added to their forces.

These units will defend the Domination Point in Domination.