"Anything stuck with enough needles will blow sky high—and if a Foxtrot is unlucky enough to be carrying grenades, those are gonna cook off too."
— Anonymous serviceman

The Type-33 Guided Munitions Launcher[2][12] or Nahle'Hax-pattern needle launcher,[13] more commonly known as the needler, is a Covenant infantry weapon.

A blueprint of the T-33 GML in the original Halo trilogy.

A blueprint of the needler in Halo: Reach.

The Type-33 Guided Munitions Launcher is a Covenant projectile weapon that fires long, sharp crystalline shards that are guided until they impale a target — hence the “needler” moniker. Several seconds after coming to rest in their target, the needles detonate, creating severe and, in most cases, fatal wounds. The Needler's top plate has 14 holes, with the needles protruding out of the holes. When the trigger is pulled, the needle is fed from the top into the "barrel" of the weapon and fired at high speed. The Type-33 GML is used by Covenant foot soldiers of nearly all types. Yanme'e are also fond of this weapon, and their efficiency with it is high as their flying capabilities and large numbers make the needles harder to dodge. When the trigger is held down, the rate at which the 'needles' are fired increases.

Unlike most Covenant weaponry, the needler does not incorporate reverse-engineered Forerunner technology.[11] The needler was one of the most unusual weapons in the Covenant arsenal and the least understood; how the weapon functions remains a mystery to human military experts and scientists. Like most Covenant weapons, the T-33 GML lacks any kind of electronic, physical or radiative connections between its "trigger" and firing mechanism.[14] However, post-war analysis and study have shown that the shards track their targets by homing in on the specific heat signatures of sighted targets.[15] The physics behind the weapon were apparently not well known as joint human and Sangheili teams were known to be studying the weapon some time after the war.[16]

Razor-sharp crystalline projectiles made of Subanese crystal, or blamite, are fired from this elaborately designed Covenant weapon; it is widely believed that these needlers use heat or organic signatures to home in on targets, and may have some relation to the Anskum-pattern plasma grenade and the Plasma Pistol's charged shots, which also react to living tissue and Sentinel mechanics. The needles appear to have some sort of "identify-friend/foe" function, as they will home in on hostile targets but not allies of the wielder. Once fired, a needle will seek its target until impact, entering the victim's body violently. After several seconds, the contents of the crystalline shard will detonate; injuries inflicted from the exploding shard are gruesome, as microscopic pieces of shrapnel can become embedded in tissue.

The crystalline projectile appears to contain some type of gas or energy, which is released upon impact with a target; after seven or more needles have struck a target in the same general area, the needles will react to each other, triggering an explosion that kills the victim instantly. The explosion of multiple needles is a result of proximal resonance instability.[5] When either a single or multiple needles detonate, they release crystal shrapnel, which can embed itself in nearby organisms; thus, friendly fire is often a necessary consideration in close-quarters combat.

The Type-33, unlike other Covenant weapons, allows the user to aim at the closest target, fire, and move on, as its homing ability allows its user to avoid being exposed to enemy fire while inflicting his own. The more needle shards that impact the target, the higher degree of damage it will do to the target; seven or more needle shards detonating at the same place will cause a massive explosion that will cause splash damage and cause shrapnel damage, which can also cause nearby explosives to detonate, giving the enemy another reason to run. The projectiles ricochet when they hit rigid surfaces at oblique angles and retain sufficient velocity, making dodging them a challenging feat. The weapon is most useful on wide-open maps, as even though it has a limited effective range, the projectiles can follow a target for a long time and will almost certainly hit anything slower than a Banshee in Halo 4. At the very least, it is a good weapon for forcing an enemy into cover. However, in newer games such as Halo 4 and 5, the needler is more effective against shields than it was in earlier titles.

While the Type-33 GML is incredibly effective against most infantry, it is much less effective against vehicles. The crystalline projectiles are slow and ineffective to even light armor and will simply bounce off of them. The needler is suited to a very limited medium range, as the projectiles have too great a travel time for long-range attacks due to losing velocity and altitude the further they travel, while at close range, the target can simply move towards the user and attempt to kill them with the resulting explosion, thus rendering the attack useless. Related to this is the Needler's lack of instant results; ie. the user could shoot a target with the 7 needles required to super-combine but be killed by the target before the needles detonate or even impact. Next, in order for the tracking ability to be most effective, the targeting reticule on the user's heads-up display must acquire the target, or if no targeting reticule is available, the user must judge how close they must be to a target in order to effectively use the weapon. While the homing ability is incredibly useful, the crystalline shard cannot track a target relentlessly - turning at a certain angle will cause the projectile to simply keep flying and miss the target completely. Fast turns at certain angles will also cause the projectile to lose the target and travel onward. The needler is also ineffective against linear energy fields, like Kig-Yar point defense gauntlets, or stationary energy shields, as the projectiles are repelled without detonating. Finally, a more minor disadvantage is that the needler is unsuited to setting off explosive devices like Fusion Coils, often requiring several clips of ammunition to destroy one, as the shards typically bounce off the fusion coils instead.

The Needler makes its first appearance in Halo: Combat Evolved, and while its effectiveness was limited to close range, the Needler was still dangerous if the player managed to get seven needles to hit an enemy target. The Needler in the first game is larger than its Halo 2 and Halo 3 counterparts. The weapon could be loaded with 20 shards per magazine, and its maximum spare ammo is 80 needles. The needles' super-combine explosion could also cause nearby grenades to go off and either do damage or kill nearby friendlies or enemy infantry. When viewed in first person, the needle shards that protrude from the weapon have a blue tinge to them until fired, then take on the pink coloring. 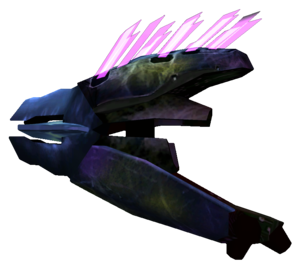 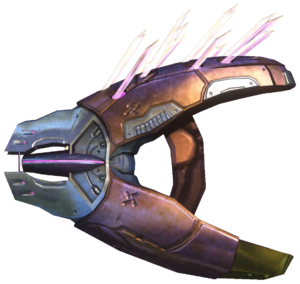 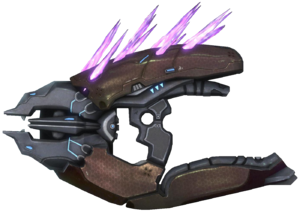 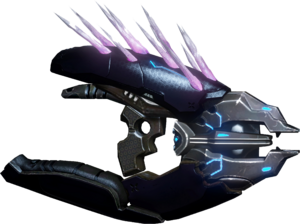 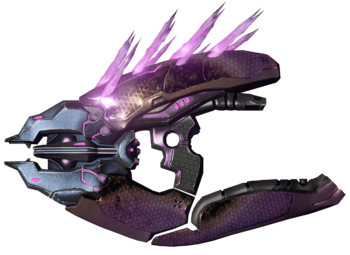 "See these holes on the top plate? That's where the needle rounds are primed. You pull the trigger and somehow they just know how to target living tissue."
— Kai-125 explaining her favorite Covenant weapon.[18]

Needlers are used by the Covenant during their war against humanity. Silver Team will occasionally scavenge needlers from dead Covenant and use them against Covenant troops.[18]