The Kewu R'shi'k-pattern rifle,[3] is a design pattern variation in the plasma rifle series of weapons employed by the Covenant and its remnants. In common lexicon, the Kewu R'shi'k is colloquially known as the "blood-hand" by Jiralhanae,[4][5] and consists of a modification of the standard Okarda'phaa-pattern plasma rifle intended for Brute use - earning it the moniker of Brute plasma rifle among human forces.

Unlike the standard plasma rifles, historically constructed by Iruiru Armory, the Brute plasma rifle was specially-commissioned for manufacture in the Sacred Promissory by the Prophet of Truth.[1]

The Brute plasma rifle is visually almost identical to the standard plasma rifle employed by standard Covenant infantry. While identical in overall shape and form to the standard plasma rifle, the variant employed by the Jiralhanae features a distinctive crimson red outer shell, as opposed to the traditional blue-purple of most Covenant weaponry including the original plasma rifle. The white to red indicator lights on the original plasma rifle are replaced with blue to purple indicators to better stand out against the recolored body. Like other plasma rifles, the precise surface texture and grip design varies from model to model (presumably dependant on design pattern differences), though all function very similarly. Due to its origins in Covenant design language rather than those of the Jiralhanae (such as the brute shot or spiker), it is one of few Jiralhanae weapons that doesn't retain a primitive design language and the iconic blades found on almost all other brute weaponry.

As its name suggests, the Jiralhanae plasma rifle fires plasma as opposed to ballistic ammunition. The weapon is powered from an internal battery cell, and when firing has a power output of 100-150 KV @ 2~3 dA, and can fire 360~540 rounds per minute in fully-automatic fire thanks in part to its dual plasma collimator design.[2] Placed atop one another, these collimators fire in a "stagger" taking the slow automatic fire of each individual collimator and combining it, this design allows a faster rate of fire and more rounds per second. The Brute plasma rifle design boasts a far greater rate of fire than standard plasma rifle variants, alongside a more powerful plasma projectile - though this is mitigated by the more rapid rate of overheating.

While two major designs of "standard" Brute plasma rifle have been seen observed in use, several major sub-variants additionally exist; 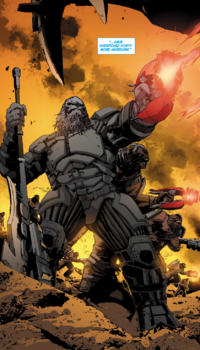 While the plasma rifle was the standard weapon of the Covenant's officer corps throughout most of the Human-Covenant War, the emergence of Jiralhanae as the Covenant military's front line shock troops saw the emergence of the red variant of plasma rifle to suit their more aggressive demeanour.[2] The weapon was manufactured in secret by the Sacred Promissory under the orders of the Prophet of Truth in preparation for the Jiralhanae's takeover of the Covenant military, with modifications to fire rate and damage that would have been deemed heretical were it not for the hierarch's personal blessing.[4][5]

The Brute plasma rifle was in service in some capacity by at least around 2548, with several employed by Atriox and his clan during the Algolis Invasion.[8] By October 2552, Jiralhanae equipped with Brute plasma rifles were present in the Fleet of Sacred Consecration during its attack on Earth, with Jiralhanae deployed into New Mombasa brandishing the weapons.[9] By this time, the weapons were known to the UNSC, though their method of operation and significance were largely unknown to humanity.[2] Jiralhanae wielding their plasma rifles were later encountered by John-117 during the Fall of High Charity[10] and Thel 'Vadam during the Battle of Installation 05[11], wherein they used them to combat Sangheili-led separatist forces. The fall of High Charity to the Flood ultimately resulted in the Brute plasma rifle becoming a rare weapon, and by the time of the later stages of the Battle of Voi and Battle of Installation 00, Jiralhanae troops had begun employing the standard and more easily accessible regular plasma rifle instead of their dedicated Brute counterpart.[12]

In Halo 2, the Brute Plasma Rifle appears later in the game in the hands of Jiralhanae enemies. It boasts several stat differences from the standard plasma rifle including faster rate of fire, lower damage and accuracy. The weapon did not reappear in Halo 3, but does appear in Halo 3: ODST. However in ODST, the weapon is simply a retextured plasma rifle, and boasts no mechanical or stat differences from the regular Halo 3 plasma rifle. The weapon later reappeared in Halo 5: Guardians in the Memories of Reach update as a power weapon in the Requisition system for use in Warzone. The Brute Plasma Rifle REQ card has the following attributes;

Changes from Halo 2 to Halo 3: ODST[edit]